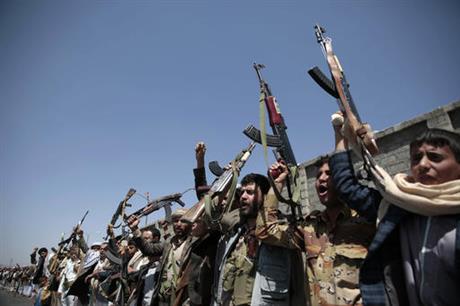 Airstrike in Yemen deepens war, puts pressure on US

SANAA, Yemen (AP) — More than 1,000 mourners were packed into the funeral hall, including some of the most powerful figures in Yemen’s rebel movement. Ali al-Akwa, who was just about to start reciting the Quran, heard warplanes overhead — but that wasn’t strange for wartime Sanaa. Surely a funeral would be safe, he thought.

Moments later, a huge explosion struck, tearing bodies apart. The ceiling collapsed, walls fell in and a fire erupted. As people scrambled frantically to get out, a second missile struck, killing more of them.

Nearly 140 people were killed and more than 600 wounded in Saturday’s airstrike — one of the deadliest since Saudi Arabia and its allies began an air campaign in Yemen in March 2015. The coalition is trying to uproot the Shiite Houthi rebels who took over the capital and much of northern Yemen from the internationally recognized government of President Abed Rabbo Mansour Hadi.

The coalition seems to have been hoping to take out a significant part of the Houthis’ military leadership and its allies, who were expected at the funeral. Instead, the attack is likely to deepen the stalemate in a war that has already pushed the impoverished country into collapse.

The bloodshed has eclipsed new U.N. efforts to secure even a brief cease-fire. Amid popular anger, the coalition has lost potential tribal allies. In an attempt to expand the war, the Houthis have retaliated by firing rockets into neighboring Saudi Arabia and at U.S. warships.

The only hope for progress toward a resolution, many Yemenis say, is if the strike prompts Saudi Arabia’s top ally, the United States, and other Western nations to halt arms sales, pressure Riyadh to ease the war and move toward negotiations.

After the strike, the White House said it will immediately review its assistance to the coalition and stressed that the support is not a “blank check.” The Obama administration is sensitive to criticism from human rights groups and some in Congress but has limited leverage with the Saudis, especially as Riyadh’s assistance is also needed in the fight against the Islamic State group in Iraq and Syria. The U.S. has warned the Saudi coalition about strikes on civilians in Yemen, but the weekend attack on the funeral appeared to have touched a nerve.

“In light of the attack over the weekend, with the scrutiny that that attack legitimately calls for, we are going to undertake additional reviews of aid and assistance that goes to Saudi Arabia,” State Department spokesman John Kirby said Tuesday. “We take this very seriously, and we have been nothing but candid and forthright with the Saudis about our concerns over civilian casualties and collateral damage and our concerns about lack of precision in the conduct of some of these strikes.”

The U.S. and Britain have sold billions of dollars in weapons to Saudi Arabia for use in the conflict. Washington also has been giving logistical and intelligence support, although this year it withdrew some personnel who it said were not linked to the coalition’s actions.

Farea al-Muslimi, the co-founder of Sanaa Center for Strategic Studies, said the West’s response will determine if the war deepens or moves toward a resolution.

“Such sudden turns either end the war or end the country,” he said. “Yemen is a country where peace is born out of huge agonies.”

Three days after the attack, investigators are still recovering human remains amid the scattered chairs and personal belongings in the sooty, smoky hall. The roof was almost completely shredded, with chunks of metal, concrete and chandeliers dangling. Pools of blood mixed with water from broken pipes.

Senior Health Ministry official Mokhtar Sharaf Eddin said the confirmed death toll as of Tuesday was 135 — but likely to rise.

The missiles, which punched two large holes in the floor and opened the room up to a parking lot below, blew some bodies up to 200 meters (yards) away, officials said.

Survivors recalled fleeing over the dead and wounded. Al-Akwa, the Quran reciter, said he picked up a boy whose foot was nearly severed and carried him out.

“It was like the end of days, where everyone ran for his life,” al-Akwa said. “In the name of God, until now I am in disbelief.”

The funeral was for Sheikh Ali al-Rawishan, the father of the Houthi government’s interior minister, Galal al-Rawishan — members of one of Yemen’s most powerful tribes, the Khawlan. In attendance were senior members of the Houthi movement and military and political figures linked to the rebels’ ally, former President Ali Abdullah Saleh.

Among the dead was Abdel-Qader Helal, the mayor of Sanaa who was widely popular and had been appointed by Hadi before the Houthi takeover. Considered a moderate who did not support either the Houthis or the coalition, he had tried mediating between the two sides.

The strike sparked a wave of outrage. U.N. chief Ban Ki-moon called it an “outrageous violation of international humanitarian law.” Saleh and top Houthi leader Abdel-Malek al-Houthi both called for “revenge” as anti-coalition protesters marched through Sanaa. The coalition initially denied it was behind the strike but then said it was investigating.

More than a year of heavy bombardment has wrecked the country of 26 million, with neither side able to gain an advantage.

The conflict began when the Houthis swept down from their northern strongholds and captured Sanaa in 2014, then pushed farther south. In early 2015, Hadi’s government fled to the southern city of Aden. Saudi Arabia and other Gulf nations launched their air campaign against the Houthis, accusing them of being proxies of Shiite-led Iran.

Coalition support kept Aden from falling into Houthi hands. Since then, Saudi-backed forces — a mix of southern separatists and Sunni militant fighters — succeeded in retaking much of the south, while other local forces are still fighting in eastern and western sections.

But the price has been devastating for Yemen, already the poorest country in the Arab world.

According to the U.N., more than 4,100 civilians have been killed and over 7,200 wounded, mostly from airstrikes. With supplies disrupted by the bombing and a coalition blockade, most of the population is considered by the U.N. as “food insecure,” famine has hit poorer areas, and 3 million people are displaced. Infrastructure, factories, hospitals and roads have been destroyed.

Three sessions of peace talks have failed. This week, the U.N. envoy for Yemen was trying to patch together a 72-hour cease-fire.

Sanaa is surrounded by Yemen’s biggest tribes, known as the “ring,” because they occupy areas around the capital. The Khawlan is one of those tribes. Previously, it and several others were neutral, with members on both sides of the conflict. But the deaths it suffered in the airstrike threaten to turn it against the coalition.

“Winning Sanaa is a battle of hearts. … The tribes are the key here,” said Sanaa-based writer Maged al-Mazhaji.

Hadi’s government has been embarrassed by the airstrike, making no official statement on the bloodshed.

“The government of Hadi is only operating under the shadow of Saudis, and he can’t say no. What happened will only diminish any credit he has” in Sanaa, al-Mazhaji said.

The Houthis, meanwhile, appear to be trying to escalate the conflict. Two missiles were fired from Houthi territory toward U.S. warships in the Red Sea, and others were fired into Saudi territory, including one targeting an air base that hosts U.S. military personnel training Saudi troops.

Navy Capt. Jeff Davis, a Pentagon spokesman, said the U.S. is still investigating the incident, in which the missiles fell harmlessly into the water Sunday.

Al-Muslimi, of the Sanaa Center, said it could be a signal to Washington of the danger of escalation.

“We are seeing that for the first time there is a direct threat to the Western interests in this Yemeni conflict. Now they will start to feel the heat.”

This article was published on Associated Press News