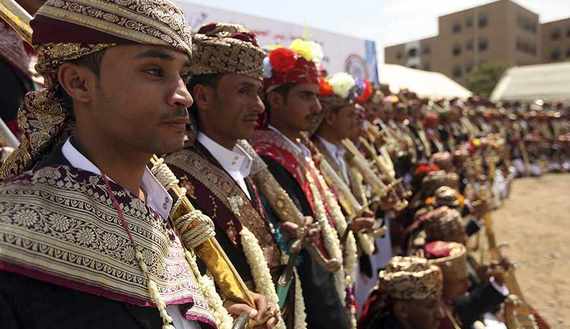 The social politics of weddings in Yemen

Yemen has unique and violent traditions that give a special character to its weddings, which are costly and lavish, especially considering the country’s low per capita income. The weddings involve traditional clothing, knives and guns, which sometime kill people — as happened in Ibb province in September, when a tribal sheikh was killed by celebratory gunfire. That incident resulted in the signing of a popular document criminalizing shooting at weddings. Yemeni law already banned that practice, but the law was not being enforced.

A year earlier, a Yemeni Airways civilian aircraft carrying 150 passengers was hit by a stray bullet fired by wedding revelers as it was about to land near Sanaa International Airport.

The largest mass wedding in Yemen was organized by the Orphan Foundation for Development and funded by former Qatari Emir Hamad bin Khalifa Al Thani. Two years ago, that same foundation organized a mass wedding that was the largest at the time and was funded by the late Saudi Crown Prince Sultan bin Abdulaziz. The change in funding source is due to the changing regional alliances of the Muslim Brotherhood. The Orphan Foundation is considered to be one of the Brotherhood’s social tools. And the compass of financial flows after the Arab Spring — under the guise of charity work — shifted from Riyadh to Doha.

Marriage as a partnership according to need

In Yemen, as soon as a young person reaches puberty, their only concern becomes marriage. Most young men and women marry between the ages of 15 and 20, with the bride younger than the groom. The marriage of female minors has become a national issue, after parliament was blocked under pressure from adopting a law regulating the matter. Religious forces see early marriage as a way to protect young people from sexual deviancy.

Also, when a family needs a new member to work in agriculture — in rural areas in particular — the family marries the son regardless of his age or financial capacity. There is a local tradition in such cases to ignore the fact that the bride is not yet sexually mature and postpone sexual intercourse for several years after marriage.

Also according to tradition, the family chooses their son’s wife in light of the social separation between the sexes, whereby the man does not meet the girl before marriage except in an unusual circumstance and with the knowledge of the family. As for the girl, her family informs her only after the young man requests to marry her. The decision to accept or refuse the marriage is patriarchal for both parties, except in the few cases when the father is educated and cultured enough to take his daughter’s opinion into consideration.

Sometimes, there may be a special kind of marriage based on the social relationship between the two families or on agreement between two young men to exchange their sisters as wives (al-shighaar marriage). In the latter case, each young man marries his friend’s sister without paying financial compensation, as is the case in some parts of Yemen. Its consequences are often disastrous for the girls, when one of the young men divorces his wife — the friend’s sister — because that forces the other man to also divorce his wife even if their marriage is happy and stable. So it is like breaking up a partnership between two parties. Such marriages may have purely material motivations, especially in wealthy rural households. Since the wife is supposed to inherit half of what the man inherits at the death of the father or mother, such partnership marriages prevent the family’s wealth from being inherited by someone from outside the family.

Marriage is affected by the existing political system. The regime of former President Ibrahim al-Hamdi (1973-77) for instance developed strict laws to set the dowry at modest amounts (in northern Yemen at the time) and bar lavish celebration and celebratory shooting. But those laws died with Hamdi’s assassination.

The marriage ceremonies now are without control, except with regard to celebratory gunfire, for which there are laws banning them, althought they are generally not enforced. The same thing applied to the system in south Yemen before the country united. During the rule of the Yemeni Socialist Party, which was close to secularism (1978-90), polygamy was a crime — according to Sharia, a Muslim man has the right to marry up to four wives concurrently. When one of the party’s most prominent figures married two wives, he was punished by being removed from his party post.

In Yemen, the wedding of a wealthy young man may cost tens of thousands of dollars because of a social tradition to flaunt one’s wealth. Meanwhile, a poor young man may not be able to celebrate his marriage as required by the habits of the region. So charities — often religious associations for social cooperation — specializing in facilitating marriage for young people appeared. They gather money from philanthropists to hold mass weddings for poor young people. But then they leave the couple in poor circumstances, and the children without support.

Associations such as the Association of Righteousness and Chastity and the Orphan Foundation also have their conditions. The young person who is allowed to join the mass wedding is generally close to the organization’s religious and political orientations and those of its financiers. The funding of mass weddings by the Orphan Foundation moved from Riyadh to Doha after the regional political alliances map changed to favor the Muslim Brotherhood. That also applies to the Saleh Social Foundation, which is affiliated with former President Ali Abdullah Saleh. That foundation’s mass weddings are granted to loyalists of Saleh’s party. The same applies to the Reform Association, which is affiliated with the Muslim Brotherhood.

Marriage in Yemen is also an unofficial means for political and tribal alliances. The intermarriage between the offspring of Gen. Ali Mohsen — presidential adviser for defense and security and the leader of the Southern Movement — and former al-Qaeda figure Tariq al-Fadhli affected the latter’s political affiliation, and he became a leader in the General People’s Congress Party, which used to be in power.

Also, the arrival of members of several Yemeni families to high leadership positions during Saleh’s reign was mainly linked to intermarriage with members of Saleh’s family. Some lost their positions once Saleh left power in 2012. They include ministers and party leaders. The same applies to tribal alliances. The kinship between the Ahmar family, which leads the Hashed tribe, and a notable family in the Bakil tribe has deepened the alliance between the two sides, which used to be rivals.

A few months ago, a Yemeni wedding turned into a political issue that preoccupied public opinion, when a wedding convoy affiliated with a tribal sheikh and partisan figure opened fire on three youths because their car got too close to the bride’s car. Two of them were killed.

The media, human rights organizations and political rivals then launched a major campaign against the sheikh and his party. Despite being identified, the killer was not arrested because the tribal sheikh was protecting him.

The further north, the more Yemenis are divided into social layers. In the extreme north, an ordinary citizen — who is not a descendant from the family of the Prophet Muhammad, that is, from ahl al-bayt, or from a Hashemite family as they are called — cannot marry into a Hashemite family. So many females in that area remain unmarried.

In contrast, a young man from the Mazayana class — which refers to butchers, blacksmiths, barbers and even vegetable sellers — or the “marginalized” (black Yemenis whose family lineages are not known for several generations back) cannot marry into a “normal” tribal family because that young man would not enjoy the needed respect of the surrounding society.

Any tribal family that agrees to marry one of their girls to men of those two classes may be unable to marry the rest of its girls, because the tribe would have committed an unforgivable social transgression. Those unwritten norms largely result in people marrying only from within their own class, resulting in social isolation in the 21st century.

Although many educated families no longer adhere to these classifications and have overcome the practice of tribal classification, some still adhere to the rule — especially in the north — where the literacy rate is low and tribal customs are stricter.

In Yemen, weddings are intermixed with politics. The results of the two are similar. Both are practices whose consequences are not considered except after they are applied, and they end up distressing those who apply them.