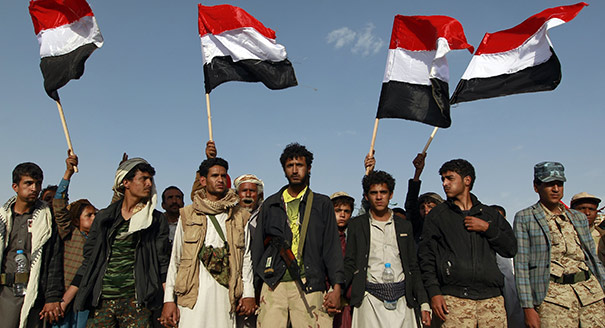 A History of Missed Opportunities: Yemen and the GCC

For cash-starved Yemen, accession to the GCC has been a highly prioritized goal. But the GCC’s members have been reluctant to allow Yemen in.

Every so often, the issue of including Yemen in the Gulf Cooperation Council, or GCC, is floated. A regional unity project gathering the oil-rich Arab monarchies of the Gulf—Bahrain, Kuwait, Oman, Qatar, Saudi Arabia, and the United Arab Emirates—the GCC has long been seen as an exclusive club of the wealthiest Arab states. For cash-starved Yemen, accession to the GCC has accordingly been a highly prioritized goal, in the hope of securing ties to its rich neighbors and improving its own security. But the GCC’s members have been reluctant to allow Yemen in.

The eruption of major political strife in Yemen in 2011 would seem to have taken the issue off of the table for good, but since the Saudi-led March 2015 intervention in Yemen’s civil war, debate on the country’s relationship to the GCC has paradoxically returned. There have been calls from some voices in the Gulf countries to commit to a policy of including Yemen in the GCC once the war is over, such as the famous Saudi journalist and former director of the al-Arabiya satellite channel Abdulrahman al-Rashed.

Rather than scoffing at the idea of Yemeni membership in the GCC, the Gulf Arab nations should realize that closer integration of the states of the Arabian Peninsula is a historic opportunity—one that they have failed to seize, time after time.

The exclusion of Yemen from the GCC has left the Arabian Peninsula divided. It has limited the natural social and cultural reach of the current GCC members, while stifling regional trade and economic growth.

Even in economic terms, where the disparity between Yemen and its GCC neighbors is indeed great, both sides would have benefited from closer integration. Experience has shown that Yemeni expatriates in the Gulf, especially in Saudi Arabia, have historically helped build the kingdom while also boosting the Yemeni economy by way of remittances. Yemen’s low levels of economic development could in fact have allowed it to fill a niche in the Gulf’s economic structure. For decades, the GCC members have relied on cheap labor from Southeast Asia when they could have looked for labor much closer to home.

While Gulf Arab resistance to an expansion of the GCC has often rested on concerns about Yemen’s internal instability, Yemen’s exclusion has in fact increased the threat to other Gulf countries. The lack of close security cooperation across the Arabian Peninsula and the continuous deterioration of Yemen’s weak economy have created a suitable environment for terrorist groups to flourish. Unlike the Gulf states themselves, the jihadists have been quick to see the benefit of regional unity. In 2008, the al-Qaeda branches in Yemen and Saudi Arabia united as al-Qaeda in the Arabian Peninsula, which has since exploited undergoverned areas of Yemen to recruit fighters from and develop plots against all GCC countries. Yemen’s weakness thus turned into a threat to the wider region.

This also applies to military security and border controls. With Yemen in the GCC, the borders of the Arabian Peninsula would have been secured by the inclusion of its territorial waters in the Arabian Sea, the Gulf of Aden, and the southern part of the Red Sea. More importantly, it would have allowed for the annexation of the Bab el-Mandeb Strait, one of the most important waterways in the world and a key bottleneck for the world’s oil trade, alongside the Strait of Hormuz between Oman and Iran.

It may seem strange that so little has been done to include Yemen in the GCC, but ever since the founding of the council in 1981, politics has gotten in the way of closer relations.

Until 1990, the country had been divided into two independent republics, North Yemen and South Yemen. As far as the Gulf Arab monarchies were concerned, the Marxist government in Aden, the capital of South Yemen, constituted a threat. In particular, this view held sway in Saudi Arabia, which supported North Yemen in its 1978–1982 war with the National Democratic Front, which was supported by South Yemen. The civil war was still going on when the GCC was established and, for the Saudis, North Yemen was best kept as a buffer zone between them and South Yemen.

The reunification of Yemen in 1990 put an end to this situation by shifting power into the hands of a coalition headed by the Sanaa-based former North Yemeni president Ali Abdullah Saleh, an ally of Riyadh. However, the Saudis also viewed the emergence of a large and unified Yemen as a potential threat.

Within months of the Yemeni unification, the Sanaa-Riyadh relationship was decisively derailed by then Iraqi president Saddam Hussein’s invasion of Kuwait, which also threatened Saudi Arabia. Saleh, who enjoyed good relations with Hussein, took a stand against the U.S. military intervention requested by the Gulf Arabs. GCC members then swiftly suspended all budgetary support to Yemen, and nearly 1 million Yemeni expatriates were expelled from Saudi Arabia and Kuwait. This greatly damaged the country’s frail economy and contributed to the outbreak of a civil war in 1994, in which southern separatists sought to reestablish the former South Yemen. All GCC member states, with the exception of Qatar, would offer financial and political support to the secessionists, although Saleh soon gained the upper hand and won the war.

These developments delayed any discussion on Yemen’s inclusion in the GCC and led to a period of very tense bilateral relationships. During that period, the Gulf’s outlook on Yemen as a potential threat colored all of its relationships with the country.

This remained the case until 1996. Then, Riyadh and Sanaa’s relationship began to thaw, partly thanks to mediation between the Saudis and Saleh by Sheikh Abdullah bin Hussein al-Ahmar, a powerful northern tribal leader with ties to Riyadh. The improvement in bilateral relations ultimately led to the signing of a border treaty in 2000, followed by formal demarcation, thus neutralizing the most prominent dispute between the two capitals. Immediately afterward, during the GCC summit in Muscat, Yemen was allowed to join GCC bodies for education, labor, sports, and health as a prelude to full accession. But the membership talks then stalled, leaving Yemen stuck at the candidacy stage.

Many Gulf officials, including Yemenis, attribute the snubbing of Yemen to then president Saleh’s lack of initiative and will. Rather than placing the GCC issue at the forefront of his political agenda and promoting it during his many visits to the various Gulf countries, he tended to limit his requests to demanding money.

In May 2011, Morocco and Jordan were suddenly invited to join the GCC. At the time, it seemed to be an attempt by the region’s monarchies to build a common front against the sweeping changes unleashed by the Arab Spring. The invitations would soon be shelved and quietly forgotten, but the affair sent a clear signal: the GCC nations were determined to ignore their closest neighbor, Yemen, even as they toyed with the idea of inviting members from far outside the Gulf region.

The onset of major unrest in Yemen, which led to Saleh’s resignation in 2012 and has now evolved into a full-blown civil war, made the question of GCC membership seem even more far-fetched than before. But in 2015, the GCC countries and their allies, led by Saudi Arabia, launched Operation Decisive Storm, a military intervention against the Iran-backed Houthi rebels who had taken over Sanaa in September 2014. This brought Yemen-GCC relations back in focus.

While they enjoy little to no leverage over Gulf Arab nations, some Yemeni politicians have attempted to use the opportunity to again raise the membership issue. Yemen’s Saudi-backed exile government has said that it will seek membership after the war is over, and it has formed a committee to study Yemen’s accession to the GCC. However, its fate remains unclear, as does that of countless other committees appointed by the exile government for similar purposes, without well-defined mechanisms to carry out its work.

Based on historical, cultural, and geographic givens, Yemen is bound to the countries of the Arabian Peninsula. Regardless of who wins or what happens, the civil war cannot change that. It is therefore imperative that both parties—Yemen and the GCC—consider new equations to redress the relationship between them. It cannot be that the GCC members express serious commitment to waging a war on behalf of Yemen’s exile government while Yemen remains unwelcome among them.

The Gulf countries have justified their most recent war on Yemen in terms of countering Iranian expansion, with reference to Tehran’s support for the Houthis. Regardless of the accuracy of this statement, the glaring reality is that even as the Gulf Arab nations grumble about the possibility of Yemen falling into Iran’s hands, they have consistently rebuffed Yemeni attempts to move closer to the GCC.

War cannot be the only way for the GCC nations to express real concern about Yemen’s unity, its future, and the fate of its people. Yemenis deserve better than experiencing Gulf Arab solidarity only in the form of an economic blockade and aerial bombardment from states that have kept the country at arms’ length in times of both war and peace.

For all their infighting, many Yemenis who view closer integration with the rest of the Arabian Peninsula as their best hope of stability and economic development share the dream of membership in the GCC. While this is not currently realistic due to the civil war and Yemen’s lack of a functioning central government, a peaceful Yemen firmly linked to its neighbors would be the surest way to fill the security vacuum that has long plagued the southwestern corner of the Arabian Peninsula.

If they truly want to help the Yemeni people and restore a government in Sanaa that would not be exclusively dependent on Tehran, the Gulf Arab nations need to act upon these shared interests. By offering a credible and realistic road map to GCC membership for a stabilized postconflict Yemen, the GCC states can provide Yemenis with a glimpse of a better future, create hope for economic recovery, and facilitate a peace deal that would serve both Yemen and the Gulf region as a whole.