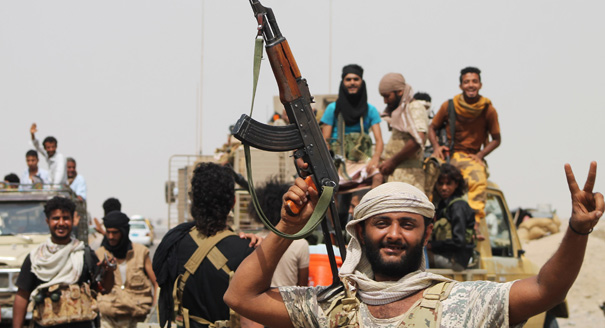 Riyadh and the Yemen Brotherhood: Back to Factory Reset

There has been no official Muslim Brotherhood entity in Yemen, despite the establishment of a Brotherhood branch in the country five decades ago; however, it has not engaged in any mass or political activity of its own to date. But the Yemeni Congregation for Reform party (Islah), founded upon the constitutionalization of political pluralism in 1990 includes a significant number of tribal and religious leaders, including many Brotherhood figures who came to the forefront when the Congregation was re-established in 1994. Since its creation and until 1997, Islah was led by Sheikh Abdullah Bin Hussein al-Ahmar, an important tribal figure, who also represented an admission ticket to Riyadh for any political or religious Yemeni figure. Indeed Riyadh saw in him its strong arm in Yemen, due to his continued alliance with large religious, tribal, and military forces.

The “November 1967” movement that took power on behalf of this alliance of tribal and Islah leaders  forged close ties with Riyadh. The result came to be known as the “National Reconciliation” of 1970 between the Imamis –who were supported by Riyadh over 8 years to no avail–, and the Republicans –whose ranks were also infiltrated by Riyadh.

This reconciliation was in effect made between two movements close to Riyadh. The Republicans opposed it after they had been gradually excluded from decision-making positions, by isolation or assassination, on the pretext that their nationalist and leftist affiliations were religiously interpreted as hostile to the Muslim Yemeni community.  This became a traditional political strategy that Riyadh towards Yemen. It attempted to turn Yemen into a copy of Najd religiously speaking, after it failed to preserve it as a political copy of itself, when Yemeni monarchic rule came to an end on September 26, 1962.  (Riyadh had previously shown some pragmatism, when it propped up the Zaidis in the face of the Muslim Brotherhood, in an attempt to preserve the monarchy in the country.)

From 1967 to 1974, Riyadh laid the bricks for long-term change in Yemen’s structure, in cooperation with the religious alliance – which included the Muslim Brotherhood and its strong tribal allies. Abdul Malik al-Tayyib, a prominent leader of this alliance, was appointed minister of education. He introduced successive changes to the school curriculum which became (and remains to this day) Egyptian. The promulgation of the religious education law (“General Commission for Educational Institutions”) as a parallel framework for public education was also reintroduced in 1974, after it had been frozen for 10 years. Judge Abdullah al-Hajri, a prominent leader in the religious-tribal alliance, who adopted the law was appointed prime minister that same year, with a recommendation by the then head of Saudi intelligence Kamal Adham to President Abdel Rahman al-Iryani.

From 1973 to 1974, Saudi Arabia sent 22 Saudi teachers to Yemen despite its own urgent need for educational staff and its recruitment of thousands of teachers from other Arab countries. They were employed in educational institutions which followed a strict Wahabi-Sunni religious curriculum that was hostile to all nationalistic and leftist ideas. The teachers facilitated the recruitment of Muslim Brotherhood members from Egypt and Syria as teachers, thus offering them a sort of protection from persecution in their countries. The teachers were also expected to eliminate the influence of Nasserite and Baathi teachers, who had been sent by Egypt and Syria to Yemen earlier to build its educational system and engage with its youth ideologically. The educational institutions formed a nucleus and a training base for the cadres and youth of the Islah party, which came to represent the Yemeni Muslim Brotherhood after 1990.

The ideas and objectives of the religious-tribal movement in the late 1970s converged with those of Riyadh in what was known as the “jihad against communism” championed by the Aden regime (the capital of the People’s Democratic Republic of Yemen until the unification of the two parts of Yemen in 1990). Saudi Arabia financed and supported the “Islamic Front” that had been established by the Islamists of the north and the Sanaa regime at the time, to fight the leftist “National Democratic Front” backed by Aden. The Islamic Front reaped substantial benefits as the Islamists led the fight at the battle fronts, and many of its members were appointed to senior security and political positions.

After the 1970s, the leaders of that alliance had no differences with Riyadh regarding the objectives, and vision of public life and international relations. The scope of the “jihad against communism” expanded in the 1980s from Yemen’s central areas to Afghanistan’s mountains where Abdul Majeed al-Zindani, a prominent leader in the Islah Party later on, and one of Osama Bin Laden’s teachers, took refuge. When he returned from Saudi Arabic to Yemen in the early nineties (after leaving Afghanistan), al-Zindani became the godfather of the jihad against communism, the first theoretician against the Yemeni socialist party, and a partner in Yemeni unity. He was the most prominent opponent of the unified Yemen constitution in 1993, because it failed to recognize Islam as the sole source of legislation.

Al-Zindani recorded speeches on tapes that were sent over to Yemen from Saudi Arabia. He became a member of the presidential council, a reward for his prominent role in the 1994 war, during which he participated in running the military operations room, and acted as the theological godfather of the war.

The four returned from Saudi Arabia in the early 1980s. al-Wadiai established the Damaj Educational Center, which attracted thousands of students from various Arab and Islamic countries. It taught the principles of Hadith according to the Wahhabi School, in the heart of Zaidi milieu in Saada. In the same governorate, a religious movement emerged that countered al-Wadiai’s sect, the “al-Shabab al-Moamen,” which later became known as the “Houthis,” led by Badreddin al-Houthi and his son Hussein. Al-Shabab, under the leadership of Badreddin’s youngest son and current leader of the group Abdul Malik al-Houthi, managed to expel al-Wadiai’s group in late 2013 from the governorate, and displace the students and teachers of the Damaj Center. This open war between the Houthis and the pro-Saudi Salafis on sectarian grounds, turned into a direct war with Saudi Arabia March 26, 2015.

After the Yemeni Spring

Following the Arab Spring, Yemen’s Muslim Brotherhood members suffered the worst stages of their relationship with Riyadh. This was due in part to the latter’s stance on Egypt’s Brotherhood and its support for Sissi. But the Yemeni Brotherhood had also turned to Doha, which it saw as a new ally and a viable alternative to Riyadh. Doha had been more generous and willing to support the Yemeni Brotherhood in their enmity toward Saleh and his regime, an issue Riyadh had not taken into consideration.

In the years that followed 2011, Yemen’s Brotherhood reached the peak of its estrangement from Saudi Arabia. Leaders from the Islah Party, such as Mohammad al-Yadomi, the head of the Supreme Council, attempted to meet Saudi leaders more than once in 2014, but the latter did not respond until Sanaa fell into the hands of the Houthis. Also the previous Saudi leadership had generally been more apprehensive of Yemen’s Brotherhood than the current one.

After the fall of Amran, a demonstration organized by Yemen’s Brotherhood in Yemen held up banners bearing the slogan “Thank you king of humanity,” expressing gratitude towards King Abdullah of Saudi Arabia for extending aid to Yemen in the form of oil derivatives. This was a first timid step toward restoring the alliance between the Brotherhood and Riyadh, although it took several months to accomplish a complete factory reset. However, the relationship was cemented again with General Ali Mohsen al-Ahmar’s escape to Saudi Arabia following the Houthi takeover of Sanaa on September 21, 2011.

The war slogan that brought together the two Saudi and Yemeni branches of the Muslim Brotherhood) became “fighting the Twelver Shiites,” which replaced the communists of old. The religious Islamic war against atheism- as it was then dubbed- shifted into a sectarian war. Some in Riyadh saw the war in Yemen as sectarian, an extension of Saudi Arabia’s conflict against Iran with Houthis as the latter’s proxy.

For the first time, the new Yemen-Saudi Arabia alliance did not include former President Saleh, who became an opponent siding with the Houthis. He was replaced President Hadi, who does not have Saleh’s clout and nor his experience to manage such complex alliances.

The Brotherhood (Islah Party) did not officially announce that it was fighting an internal war against the Houthis. However, the party did issue a statement endorsing the airstrikes led by Riyadh in Operation Decisive Storm against the Houthis one week after the start of the bombing. Moreover, reformist leaders, such Mahmoud al-Mekhlafi, are currently leading fronts of confrontation against the Houthis in Taiz. After the Islah Party issued the statement, the Houthis arrested more than 120 of its leaders in one single day, and considered it the first enemy at home. Most of the Islah leaders now live in Riyadh, and are cultivating different relations with Saudi Arabia—in comparison with the past few years when no leader set foot there.

Riyadh and Sanaa’s Brotherhood have converged to achieve political gains under a religious-sectarian cloak. However, Riyadh outperforms the Brotherhood in promoting the Yemeni war as a sectarian struggle. The Brotherhood’s official discourse is almost void of sectarian attributes: its sees the struggle against the Houthis as one with an exclusionary group orchestrating a coup d’état.

This alliance of necessity should be considered within the framework of the Brotherhood’s dossiers being reconsidered at the regional level. Furthermore, the Brotherhood’s presence in Riyadh is the fruit of communication between Turkey and Saudi Arabia, who happen to agree on Yemen, while they disagree over Egypt.

Finally, while Riyadh is certainly siding with the Brotherhood and against the Houthis, the alliance does not go much further. In addition to the Brotherhood’s affinity with Doha whose relationship with Saudi Arabia is one of frozen enmity, Riyadh no longer considers Yemen’s Brotherhood as part of a traditional Yemeni setup based on tribalism and religion, and whose objectives converge with those of Riyadh. Instead, Riyadh deals with the Brotherhood as part of an international politico-religious organization, that does not regard Salafi Wahhabism espoused by Riyadh as an authority to the extent that warrants it Riyadh’s historical support.

This article was published in Arabic by Assafir Arabi