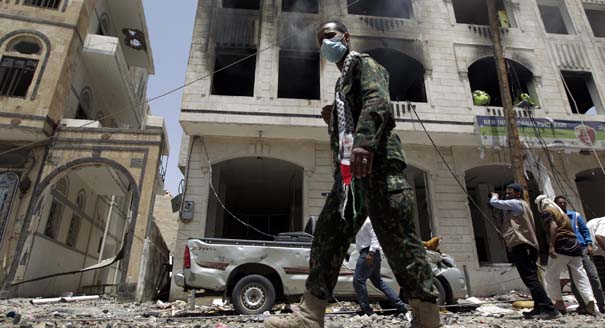 The Gulf’s Failure in Yemen

Since late March, a Saudi Arabia-led military coalition has been bombing Yemen extensively in an attempt to push back the Houthis, an insurgent Shia group, and their ally, former President Ali Abdullah Saleh. The coalition’s goal is to force the Houthis to retreat and to weaken Saleh’s hold on power. But so far, the only definitive outcome of the war is civilian devastation: At least a thousand Yemenis have died, thousands more have been injured, and hundreds of thousands have been forced to flee their homes.

Even if the Gulf countries do eventually succeed in driving out the Houthis, their intervention in Yemen is actually a sign of their failure, particularly Saudi Arabia’s. In effect, the richest country in the Arab world has had to bomb the poorest one to change its political dynamics. One might even go as far as to say that the current crisis in Yemen is a direct result of regional inaction over the last few years, if not decades

In 2011, the Arab Spring pushed the country to the brink of civil war as protestors sought to oust a stubborn Saleh. The United Nations intervened by crafting a model for a peaceful transition with the support of six countries from the regional Gulf Cooperation Council (GCC). The initiative led to a successful handover of presidency from Saleh to interim leader Abd Rabbuh Mansur Hadi, but at that time, the Gulf States were not deeply invested in the process and only played a limited role in the power turnover. They had other preoccupations. Saudi Arabia, for example, was consumed with supporting Egypt’s own leadership change, and other Gulf countries were attempting to topple President Bashar al Assad’s regime in Syria.

These same countries watched from the sidelines as this UN-administered GCC project unraveled. After Saleh’s exit, the gradual power transition focused on building consensus among Yemen’s elites. Hadi proved an incompetent leader, unable to provide either physical or economic security to an unstable country. Over the years, while Hadi and the UN envoy to Yemen, Jamal Benomar led the peace process, busying themselves with meetings in the capital’s five star hotels, armed groups like the Houthis began to take over large swaths of the country. Here, the international community is also to blame. Last year, in attempt to stop the Houthis’ violent spread across Yemen, the UN Security Council sanctioned the group’s leaders with travel bans and asset freezes. But since the targeted figures never travelled outside Yemen and dealt strictly in cash, the sanction was a joke.

Although the Gulf countries backed Egypt with billions of dollars in both aid and investment during its own transition, they took an aloof, supervisory role in Yemen. Technically, the Gulf States saw Yemen drowning long before the Arab Spring, but never sought to toss it a life preserver. For decades, Yemen had made requests to join the GCC because inclusion would end the restrictions on Yemeni laborers in the Gulf and thus, provide its youth with labor opportunities. However, Yemen’s Gulf neighbors dismissed its appeals for membership. Although they did not give a formal reason for the rejection, it is quite obvious that Yemen is much poorer than the GCC members and further, is the only republic in this club of monarchies.

The Gulf countries are not just guilty of turning a blind eye to the needs of their less-affluent, southern neighbor. Historically, they have also punished the Yemeni people for the decisions of their leaders. In 1990, Saleh supported former Iraqi President Saddam Hussein’s decision to invade Kuwait. Instead of trying to push Saleh out of power, Saudi Arabia retaliated by kicking out more than one million Yemeni migrant laborers from its soil on the second day of Saddam’s intrusion into Kuwait. This move was a shock to Yemen’s already weak economy since it was unable to absorb all of the returnees. Moreover, Yemen lost billions of dollars from the wire transfers that its laborers once sent back home. The country is still suffering from the effects of that exodus. Saudi Arabia also suspended the aid to Yemen that it was using to build crucial infrastructure such as schools, hospitals, universities, and roads.

Even today, Saudi Arabia continues to show its disapproval of the elites’ decisions by punishing the people of Yemen. Instead of directly punishing the Houthis (the blockades are preventing the flow of food to the country and causing a silent and slow massacre of the Yemeni people) or attempting to address the issues that brought them to power (such as Yemen’s lack of skilled leaders), Saudi Arabia embarked on military campaign without a clear, long-term vision for getting Yemen out of this new conflict.

Now, to help Yemen find its way out of the hole, regional and international communities need to reconsider their methods of brokering peace in the beleaguered country. Neither the current draft constitution nor the proposed federal division of Yemen’s regions enjoy any sort of consensus approval or popularity in Yemen. In fact, the Houthis’ opposition to these so-called political solutions helped them rise to power. Further, creating a new Yemen—through a fresh constitution or federalism—will not work until state institutions are functioning again. A peace plan must stay grounded in the present reality, not balloon into an overly ambitious plan for the future.

More importantly, regional powers, especially the Gulf countries, need to reevaluate their policies toward Yemen. Clearly, even if the Houthis are militarily defeated in this battle, the reason for their political and military rise—living standards, political marginalization, and weak government will not have been addressed. Therefore, the standards to evaluate success in Yemen should not be military ones. Instead of creating a new regional order that is narrowly focused on countering Iran, the GCC can be a model for regional cooperation. But this cannot happen while Yemen is left out of the GCC. And it most certainly cannot happen if the GCC policy toward Yemen is driven by sectarian motives. The Houthis must be punished for their actions, not for their sect.

Above all, more neutral actors, such as Oman and the European Union, should be involved in both regional and international peace plans. They could demand an immediate ceasefire and also ensure that there is an adequate flow of food and medical supplies to the country. These neutral players could also renew their commitment toward Yemen by placing economic and local priorities before regional rivalries. Yemen’s most critical issue at the moment is that more than half of its population is starving. Therefore, the priority should not be twisting Tehran’s arm via Sanaa.

The recent appointment of Khaled Mahfouth Bahah as Yemen’s vice president should be viewed as a chance to shift the power tide away from the current president, Hadi, and to eventually replace him. It is also an opportunity for the Gulf countries to express their commitment to Yemen’s economic and political growth rather than use the country as a battleground for regional rivalries.

If the international community and regional countries do not act to save Yemen, it’s difficult to predict how the country will end up. It may follow the fates of Syria, Libya, or Iraq, or even worse, devolve into a twisted amalgamation of the three.

This article was published in the Foreign Affairs.