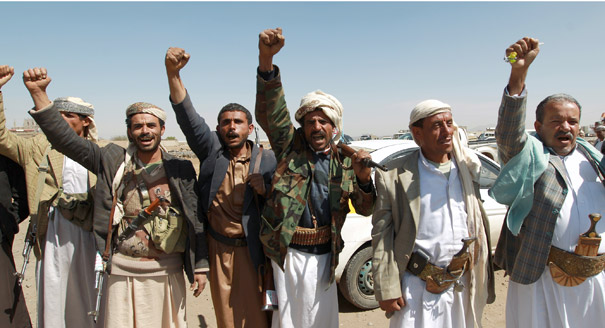 The Popular Committee Phenomenon in Yemen: Fueling War and Conflict

Despite intense debate over who will lead Yemen, any political solution much address the issue of popular committees on both sides of the conflict.

The situation in Yemen has reached new heights of complexity with a Saudi-led military intervention against the Ansar Allah movement, a Zaidi Shia Islamist group more widely known as the Houthis. A Libyan scenario has emerged with two rival governments in Yemen: one led by President Abd-Rabu Mansour Hadi (now in Saudi Arabia), which is based in the southern port city of Aden and enjoys a higher degree of local and international legitimacy but more limited authority, and another by the Houthis, who are establishing their own governing structures in the capital Sanaa and in large swaths of northern and western Yemen in a tacit alliance with forces loyal to former President Ali Abdullah Saleh.

Both sides have formed so-called popular committees, with some emerging in Aden under the command of President Hadi and others forming in Sanaa under the command of the Houthis. Though the international debate about Yemen focuses on who will head the country, one of the most important features of the crisis domestically is this phenomenon of popular committees. By mobilizing local forces outside of formal political configurations, both sides are attempting to rally armed support and to overpower their rivals, while simultaneously undermining the structure of the state and releasing centrifugal forces that could prove impossible to contain in the future.

On the Houthi side, the committees have been called by various names, including popular committees, people’s committees, and revolutionary committees. Regardless of the name, they are armed militias seeking to control public life, including in the capital.

The committees did not surface in an organized manner until the Houthis, whose original power base is in the far northwest of Yemen, took over Sanaa on September 21, 2014. As they attempted to wrest security powers from the government of former prime minister Khaled Bahah—thus violating the so-called peace and partnership agreement of September 2014—tribal militants affiliated with the Houthis deployed throughout the streets of Sanaa, manning checkpoints erected throughout the city and stationing themselves at government buildings as substitutes for official security services.

According to a former government official, on January 21, 2015, the Houthis presented what he termed a “shopping list,” demanding thousands of government positions for members of their committees. This further aggravated the crisis between the government and the Houthis.

In mid-January 2015, a conflict over jurisdictions between the committees and a group of presidential guard soldiers triggered a battle for the presidency, exacerbating the situation in Yemen and leading to the resignation of Bahah, who was subsequently placed under house arrest. The situation in Yemen deteriorated to a new low thereafter. Ultimately, President Hadi was also forced to resign, though he then tried to reestablish himself as head of state from his refuge in Aden. Unable to stem the Houthi offensive, Hadi called for foreign assistance, which has arrived in the form of Saudi-led military intervention.

Popular Committees on Hadi’s Side

Popular committees are an old phenomenon in Yemen. Irregular armed forces played a major role in the 1962 revolution in what was then North Yemen and in subsequent internal conflicts until North Yemen and South Yemen unified in 1990.

In the 2000s, Houthi-affiliated popular committees became active in a number of northern and central provinces. Meanwhile, other popular committees were established between 2010 and 2012 to assist the Yemeni army in operations against the Sunni extremist group known as al-Qaeda in the Arabian Peninsula (AQAP) in the southern regions of Abyan and Shabwa.

A Useful Tool or Unruly Militias?

Relying on popular committees is not a risk-free strategy for either President Hadi or for the Houthis. Even though the pro-Hadi committees remain under government oversight, and the Houthi committees are governed by the ideological and religious convictions of veteran fighters, popular committees on both sides have also attracted unemployed youth and people with criminal records.

The state-sponsored committees have taken over some of the jurisdictions of the official military and police, thus undermining their authority. The committees’ loyalties are also uncertain and they can quickly turn into a foe of the army and a source of armed chaos. Indeed, whenever the government breaks a promise to provide funding or other support to a committee leader, his forces quickly turn their state-supplied weapons against the state.

For example, militias from the Hashid tribes that had previously fought alongside the government against the Houthis have blocked main roads in northern Yemen when refused financial compensation. Similarly, pro-government popular committees in the province of Abyan seized a number of government buildings and declined to hand them over to the army when the government failed to live up to previous promises of financial support.

Meanwhile, the Houthi popular committees in Sanaa have gone beyond their assigned military and security roles to play a judicial role by forming arbitration committees to resolve disputes among citizens. Although there was a public outcry after a Yemeni activist was kidnapped and tortured to death by members of the Houthi committees, this has not led to punitive measures against their members.

The official security services have been replaced by the committees in Sanaa, further undermining the state and its institutions. Yet the biggest damage to the security institutions came when commanders loyal to these militias were appointed to sensitive posts, even though those same commanders had fought fierce battles against the army in the past. This increases the risks of the already fragile army turning into a full-fledged militia.

An Obstacle to Peace

The unchecked rise of the popular committees is doing direct, dramatic damage to Yemen as a state. For example, with the Houthi takeover of government and army institutions, most direct and indirect support provided by regional and Western powers to Yemen has been suspended. Meanwhile, media outlets quoted U.S. sources as saying that the United States has lost track of a half billion dollars’ worth of military equipment that it had granted to Yemen in the past few years. Very likely, this equipment is now in the hands of various Houthi popular committees.

Ultimately, it is impossible to think that a lasting peace can come to Yemen in the presence of armed non-state actors such as the popular committees who, by their very nature, undermine state institutions and obstruct central decisionmaking.

A political solution in Yemen may seem far off, but if and when one is proposed, it will have to address the issue of popular committees. To avoid further escalation of the violence in Yemen, regional and international communities should end the flow of weapons and funds to popular committees. Furthermore, Western powers should avoid granting them any official legitimacy as they continue to undermine state institutions.