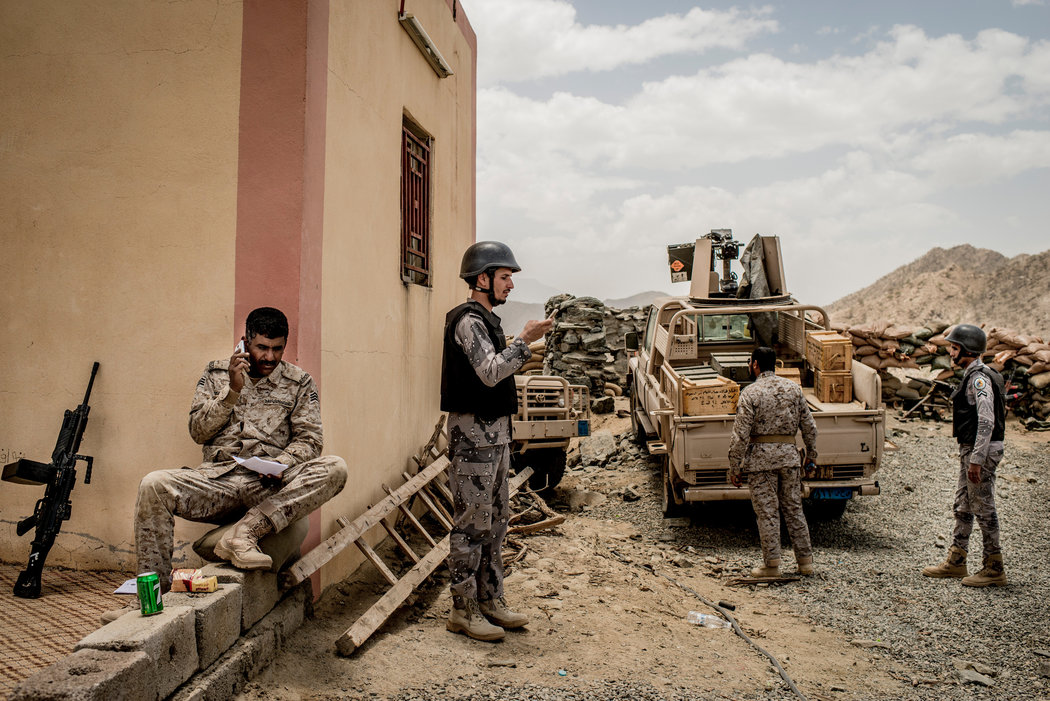 SANA, Yemen — For nearly three months, Saudi Arabia, along with its allies, has been bombing Yemen, its southern neighbor, hoping to force the retreat of Shiite rebels who have seized major cities and to return the country’s president from the Saudi guest mansion where he lives to the presidential palace.

So far, it has not worked. The rebels, known as the Houthis, have gained ground, more than 2,600 people have been killed, and aid groups have blamed the Saudi-led bombing and limits on maritime traffic for exacerbating a humanitarian crisis in Yemen, the Arab world’s poorest country.

With the failure of talks last week in Geneva to establish even a short-term cease-fire, it increasingly appears that Saudi Arabia lacks a realistic strategy to end the war, according to analysts and Yemenis interviewed in different parts of the country. In fact, many of them said Saudi intervention had made matters worse, expanding the violence while making resolution even harder to achieve.

“It is very clear that the Saudis did not do their homework before they went into Yemen,” said Farea al-Muslimi, a Yemeni visiting scholar at the Carnegie Middle East Center in Beirut, Lebanon. “They thought it would be really easy, but it has not turned out that way.”

Instead, Saudi Arabia and the coalition it is leading have added an international dimension to what analysts said had essentially been a domestic conflict, while also prompting frequent attacks on Saudi Arabia’s southern border and creating space for extremists to expand.

There is much riding on the outcome for the United States, which has provided the Saudis with advice on targets and has watched with dismay as the number of civilian casualties has risen. Yemen is home to the branch of Al Qaeda long considered the most dangerous to the West, and the jihadists of the Islamic State, new to the country, claimed a number of deadly attacks last week in Sana, the capital. 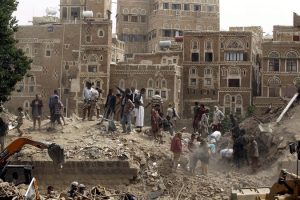 In an interview on Monday, Brig. Gen. Ahmed Asiri, a spokesman for the Saudi-led coalition, defended its progress, saying that the bombing had degraded the Houthis’ military strength and destroyed many of their heavy weapons while helping Yemen’s president, Abdu Rabbu Mansour Hadi, build a government in exile.

“We shouldn’t be in a hurry,” General Asiri said, adding that the United States, NATO and others had worked for more than a decade to try to set up a stable government in Afghanistan.

He also blamed the Houthis for the country’s civilian deaths.

“The Houthis are controlling the ground,” he said, “and if you are fighting among civilians, having your checkpoints everywhere, you will come up with this kind of casualties.”

Since the Saudi-led bombing campaign began on March 25, Saudi leaders have stated many objectives, including weakening the Houthis, forcing them to withdraw from captured territory and re-establishing the government of Mr. Hadi, who fled the country by boat in March. But the complex mix of fighters on the ground has stymied those goals.

The conflict began with the collapse of a transition plan put in place after an Arab Spring uprising led to the removal of President Ali Abdullah Saleh in 2012.

Opposed to parts of the plan, the Houthis pushed out of their strongholds in the northwest and seized territory including Sana, reaching Aden in the south before Saudi bombs slowed their progress. The Houthis adhere to an offshoot of Shiite Islam known as Zaydism and had battled the Yemeni state off and on for years. 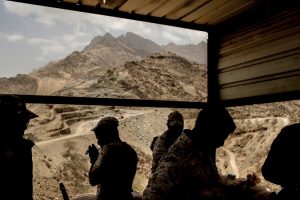 While some Houthis seek to participate in the political process, others are driven by a messianic zeal and speak of sacking Jerusalem and Mecca, Saudi Arabia, exacerbating fears in that country. Their fighters often chant, “Death to Israel, death to America,” sometimes also cursing Jews and Saudi Arabia.

Speaking from a hospital bed in Sana where he was recovering from wounds sustained during an airstrike, Ahmad Haza, a Houthi fighter, described all of his group’s enemies as terrorists who needed to be defeated by his group, also known as Ansar Allah, or Supporters of God.

He expressed no regret about the group’s siege of Aden, nor its shelling of civilian neighborhoods. “Moving forward, moving forward,” he said. “Ansar Allah never backs off.”

Fighting alongside the Houthis and essential to their military progress are large parts of the Yemeni Army loyal to Mr. Saleh, who seek to regain power.

The anti-Houthi forces are even more diverse, containing Yemeni Army units, armed tribes, secessionists seeking independence for southern Yemen and Islamic hard-liners, including Al Qaeda, which has embedded itself in the militant landscape. Many share nothing other than their hatred of the Houthis. Few are loyal to Mr. Hadi, and some even oppose Saudi Arabia, despite its air support against their enemies.

“I was happy at the beginning because they would strike the Houthis on the front lines,” said Mohammed al-Zuari, a southern separatist fighter. But then, he said, a Saudi airstrike killed 16 of his men. Mr. Zuari did not care for Mr. Hadi, he said, but he was fighting to defend his region against “invaders.”

Saudi leaders have portrayed the Houthis as an Iranian proxy force similar to Hezbollah in Lebanon and have presented their campaign as a strike against Iranian influence in the Middle East.

That has become, in some ways, a self-fulfilling prophecy, analysts said.

Mr. Muslimi, the Yemeni scholar, said Iran had not originally invested much in the Houthis, but considered them “the cheapest middle finger it could give to Saudi Arabia.”

Since the campaign began, however, Iran has increased its support and Shiite movements in Lebanon and Iraq have adopted the Houthis as brothers in arms.

“I believe that if the Yemenis are left to their own devices, they can negotiate a way out of this,” said Stephen A. Seche, a former American ambassador to Yemen. “But with all these other powers mucking about, that becomes very difficult.”

The Houthis, too, have contributed to the humanitarian crisis. They have besieged civilian areas, and their advance caused the collapse of government services many Yemenis depend on.

But in choosing to fight the Houthis with air power alone, the Saudis may have picked an unwinnable fight while drawing the ire of suffering Yemenis.

“In some ways, all the Houthis have to do is survive to win,” said April Longley Alley, an analyst with the International Crisis Group. “And they are not only surviving, they are expanding.”

Since destroying many of the Houthis’ obvious military targets, coalition jets have begun bombing their enemies’ homes, and near daily airstrikes for weeks on end have caused widespread destruction in the Houthis’ homeland in Saada Province.

“We often have mass casualties,” said Hassan Boucenine, the head of mission for Doctors Without Borders in Yemen, which supports medical facilities in the area. “The airstrikes are terrifying the population.”

Coalition controls on maritime traffic have kept most commercial goods out of Yemen, causing spikes in food prices and fuel shortages that have shut down hospitals and stranded ambulances. Malnutrition is spreading, as are outbreaks of malaria and dengue fever, with fewer international organizations operating in the country to help local medics.

“We need more humanitarian actors to come in,” Mr. Boucenine said. If the fighting does not stop, he added, the humanitarian crisis “is not going to be manageable by anyone.”

The daily deprivations in Yemen were shared with Security Council diplomats by the special United Nations mediator, Ismail Ould Cheikh Ahmed, at a briefing on Wednesday in New York. He said that the country was bordering on famine and that polio could make a comeback. Mr. Ould Cheikh Ahmed also said he continued to push for a truce.

But he said the Saudi-led coalition insisted on two things first: the withdrawal of Houthis from strategic cities and monitors on the ground, to ensure that a truce is not broken. The Houthis, he said, have not agreed to withdraw, arguing that extremists would step into the breach.

The war has turned many Yemenis against their northern neighbors.

Fatoom Anam was at a celebration with other women last month in Sana when a Saudi strike on a munitions dump in the Mount Nuqum neighborhood caused an enormous blast.

“We heard explosions and looked out the window to see Nuqum bursting with fire,” she said from a hospital bed in Sana.

A living room wall soon collapsed on her, causing her to miscarry and killing four children and one woman in the building.

“God will sort it out with whoever is responsible,” she said.