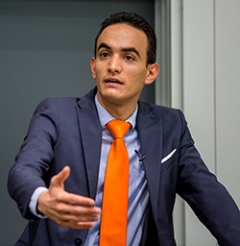 Is There a Path to Peace in Yemen?

New York, December 21, 2015—By deploying drones in a hunt for suspected terrorists and backing the Saudi Arabian-led intervention in Yemen, the United States is fueling “a legacy of violence” and creating bitter enemies among the civilian population, warned Yemeni writer and activist Farea Al-Muslimi, who spoke at Columbia Law School last week. The December 9 event was sponsored by the Law School’s Human Rights Institute, Rightslink, and the Columbia Human Rights Law Review, as well as Columbia University’s Institute for the Study of Human Rights and the Middle East Institute.

“More than 6,000 Yemenis have been killed in the last few months alone due to the devastating ongoing wars,” Al-Muslimi told the packed lecture hall. “Since the intervention of Saudi Arabia in Yemen, backed—militarily and politically—by the United States of America, Yemenis have been going through the worst time in their history.”
Over the last year, a civil war exploded in Yemen. Southern separatists and forces backed by Saudi Arabia, loyal to the government of Abd Rubbuh Mansur Hadi, are fighting Houthi forces supported by Iran and allied with former president Ali Abdullah Saleh. Meanwhile, both sides have been attacked by the Islamic State of Iraq and the Levant and Al-Qaeda in the Arabian Peninsula, which controls some territory.
“After nine months of war, the Houthis are stronger than they were, and the Yemenis are more devastated. What’s the way out of this? I think it’s very hard to imagine as long as the international community continues on the same path. If we are looking for peace in Yemen, and we’re looking for peace in the region overall, the international community needs to stop arming both sides in Yemen,” Al-Muslimi said.
Al-Muslimi, who was a pro-democracy activist during the 2011 peaceful uprising in Yemen, said that he had seen 15 wars during his life. “It would be misleading to say Yemen’s misery started nine months ago,” said Al-Muslimi. The present conflict took root “when the international community stood against the Yemeni uprising.”
In 2011, as the wave of protests known as the “Arab Spring” swept across the Middle East and ousted leaders in Tunisia, Egypt, and Libya, pro-democracy activists staged countrywide demonstrations against the rule of Saleh, who had held power for more than three decades.
“It was the most peaceful protest of the Arab Spring,” Al-Muslimi said. “Yemenis took to the streets, and despite the fact that the regime attacked them brutally, they persisted in doing so. However, they were not allowed to continue their political uprising.”
The Gulf Cooperation Council—an alliance of surrounding Arab states, supported by the U.S., the European Union, and the United Nations—intervened, seeking a peaceful solution in a power-sharing arrangement between elites from the old ruling party and the traditional opposition party. Not one representative from the protest movement was at the bargaining table or included in the agreement. 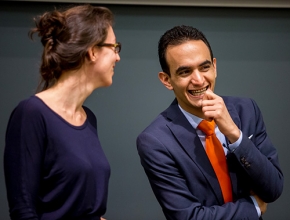 “After the failures in Syria and in Libya, the international community had to do a make-up homework, and that make-up homework was Yemen. Instead of supporting the process, it faked a process. For the first time in history, the United Nations supported a political deal that gave unconditional immunity to the dictator,” said Al-Muslimi.
In the search for stability, he said, “a very pragmatic” approach “traded justice for security, and it ended up losing both. Everyone was looking regionally for consistency in Yemen, but now they’re looking for wars in Yemen. It has to be stopped.”
Al-Muslimi said that in pursuing a “security-focused strategy” in Yemen, the U.S. has made matters worse.
“Many of you will remember Farea Al-Muslimi’s powerful testimony to the U.S. Congress on the impact of drone strikes in Yemen,” Professor Sarah Knuckey told students in attendance at Al-Muslimi’s talk. Knuckey is the co-director of the Human Rights Institute, director of the Human Rights Clinic, and Clinical Associate Professor.
Al-Muslimi had testified before Congress in 2013, just six days after the U.S. deployed a drone to attack a suspect in his hometown, a farming village in Yemen. “What radicals had previously failed to achieve in my village, one drone strike accomplished in an instant,” he testified. “There is now an intense anger and growing hatred of America.”
Al-Muslimi said that the “unconditional support the Saudis are getting right now from the United States” was also harming Yemen. The recent $1.3 billion sale of American “smart bombs” to Saudi Arabia for its military campaign “is perpetuating this legacy of violence in Yemen,” he said. Earlier this year the Pentagon admitted to losing track of $500 million in military aid given to Yemen’s government, and it expressed fear that the weaponry had fallen into the hands of the Houthi rebels or al-Qaeda. In September, the U.S. supported the appointment of Saudi Arabia to head up a key United Nations panel on human rights.
“It was the best thing to have ever happened to Saudi Arabia and Houthis,” said Al-Muslimi. “Basically the U.S. said, ‘You can do whatever you want.’”
The international community “could not deal with the Arab Spring—there was too much democracy happening in the protests,” Al-Muslimi said. “It was not a two-party system; it was something no one could afford or actually understand. The U.S. needs to stop what it’s doing right now. If there’s one thing clear from the last four years, it’s that the United States of America along with Western countries have no idea–and have brought more harm than help to the Yemeni people. You always hear this kind of thing in the West: ‘The Middle East is not ready for democracy.’ I think the problem is the West was not ready for democracy in in the Middle East.” 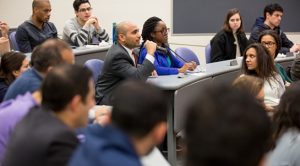 “Listening to Farea was so inspiring,” said Modupe Odele LL.M. ’16, a student in the Human Rights Clinic who is focusing her LL.M. studies on international law and human rights. “It was great to meet, speak with, and learn about Yemen from such a passionate advocate. One key take away for me was his statement on how contextual research is a vital part of our work. Meaningful human rights work requires deep understanding of history and socio-political dynamics.”
Al-Muslimi has written for Foreign Affairs, Foreign Policy, the National, and Al-Monitor. He is the founder and chair of the Sanaa Center for Strategic Studies, a Yemeni think tank, and he is currently a visiting scholar at the Carnegie Middle East Center in Beirut.
This article was published on Columbia Law School