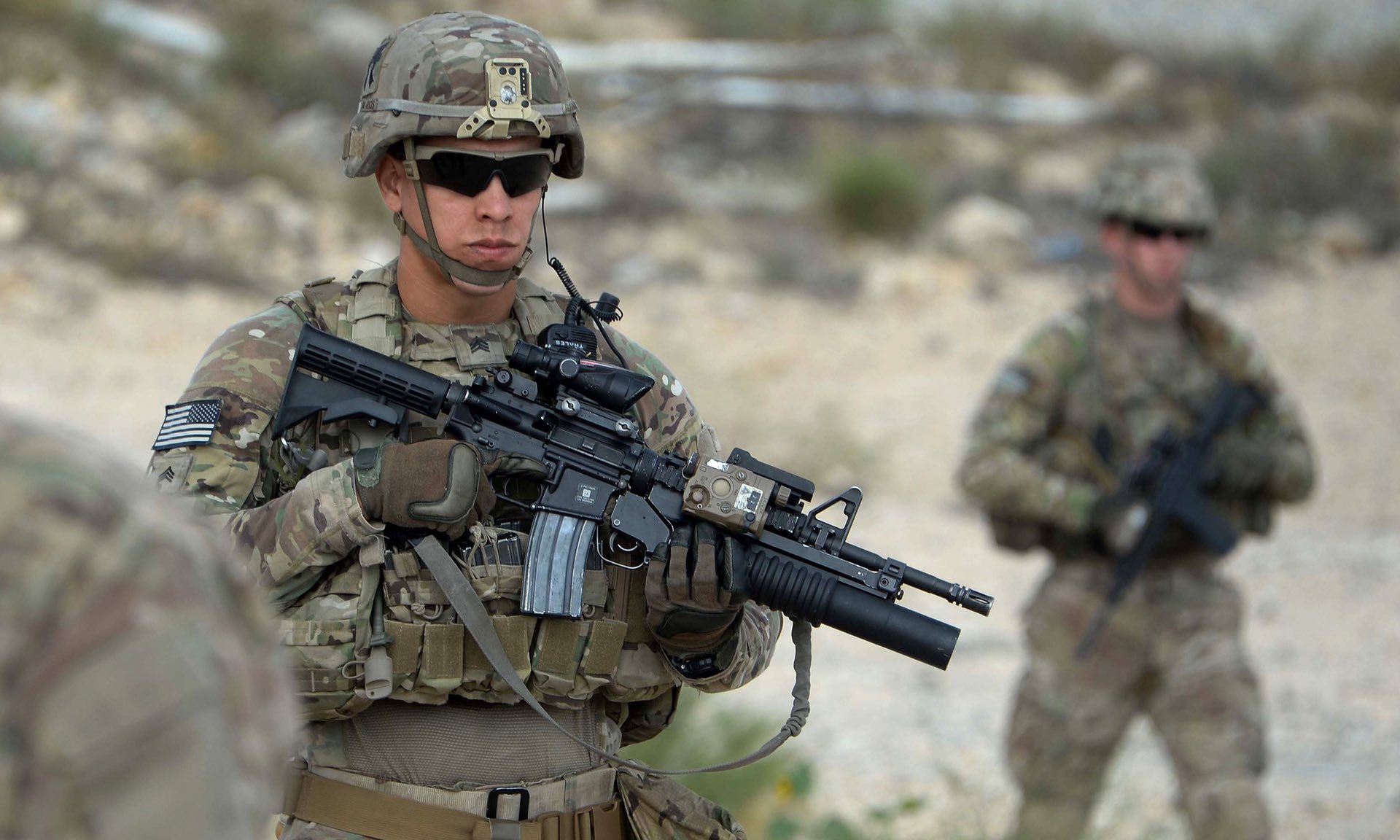 Barack Obama’s final State of the Union marked the beginning of the end of his time in the White House and stands as an epitaph for the dream of a peace presidency.

Obama swept into office on a pledge to end the Iraq war and, less heralded, achieve some semblance of success in the Afghanistan one. He vaulted into serious contention for the Democratic nomination by picking a first-principles fight with Hillary Clinton about ending not only the Iraq war but “the mindset that got us into war in the first place”.

The expectations for Obama from a war-weary west were so high he received a Nobel peace prize within months. Never a pacifist, and always one to embrace complexity, he accepted the award with a speech defending the use of military force.

As a wartime president, he has resembled his hated predecessor George W Bush, in execution if not design. He will leave office as Bush did: passing on to his successor two wars – one the longest in American history, the other a reboot of the conflict he promised to end. Unlike in previous speeches, Obama did not boast in the State of the Union of ending either.

While Obama’s claim to a peace presidency may have failed – “the tide of war is receding” is a now-forgotten 2012 re-election theme – the men and women looking to succeed him do not seem to want the mantle.

Bernie Sanders, the most leftwing candidate, emphasizes his economic message. Clinton, who was perhaps the most hawkish member of Obama’s cabinet, has pledged to escalate Obama’s war in Iraq and Syria. Ted Cruz, the leading Republican most inclined to question familiar conservative militarism, still calls for the “carpet-bombing” of Isis.

“If the pronouncements of presidential candidates are any indication, with the exceptions of Rand Paul and Bernie Sanders, Obama’s successor will likely expand and deepen US military commitments and operations around the world,” said Micah Zenko of the Council on Foreign Relations.

To Obama’s advisers, the choice has always been between his relatively restrained uses of force and the ground invasions launched by Bush. They consider an important aspect of Obama’s legacy to be his rejection of even more extensive military adventures proposed by Republicans. Obama’s foreign policy mantra is Don’t Do Stupid Shit, and he tends to set the bar for Stupid Shit at Ponderous Ground Warfare.

“American leadership in the 21st century is not a choice between ignoring the rest of the world, except when we kill terrorists; or occupying and rebuilding whatever society is unravelling,” Obama said in his speech on Tuesday night. He practically dismissed the bloodshed in the Middle East as a tragic inevitability, calling it a “transformation that will play out for a generation, rooted in conflicts that date back millennia”, as if US choices, including the wars that have become part of the regional landscape, make no difference.

His lasting contribution to the world, aides contend, will be a diplomatic accord designed to prevent a nuclear Iran and an end to the embargo of Cuba. The rest they tend to treat as footnotes, asterisks or good-faith efforts to make the best of a poor situation he inherited.

Of course, Obama is not responsible for every conflagration in the world. But the combination of a bleeding Syria, an escalated Iran-Saudi contest for domination of the Middle East, an irredentist Russia, a global umbrella of counter-terrorism and the inability of Obama to bring his own global priorities to successful conclusions risks marginalizing peace as a geopolitical objective. The next president may look at Obama and decide ending wars is Stupid Shit.

The Afghanistan war Obama inherited had a 32,000-troop footprint. The war he will bequeath will have somewhere between 5,500 and 9,800. In between, Obama escalated US troop levels to around 100,000 in hopes of dealing the Taliban a blow sufficient to force a peace that never materialized. Instead, the Taliban have defied over 14 years of war and Obama’s own promises that at least US “combat” has ended. Last week, the Taliban launched an hours-long assault in Helmand province that killed a US special forces soldier – the seventh US casualty in Afghanistan since 21 December – and forced the Pentagon to acknowledge it was a “clearly a combat situation”. Obama offered no substantive mention of Afghanistan in his speech.

Obama pulled all but a rump troop presence out from Iraq in 2011, although he attempted without success to negotiate a residual force of up to 5,000. Historians will have to determine whether Obama could have convinced the Iraqi parliament to accept that force.

But the pullout briefly closed a chapter in a string of military actions in and over Iraq since 1991 more than it ended a war. Obama returned in summer 2014 to war in Iraq, this time prosecuted primarily from the air and also across the border in Syria, against Islamic State.

The anti-Isis war has shown evidence of confusion within the administration. Obama and aides present maximalist rhetoric, pledging to “ultimately destroy” Isis, but the troop commitment has been minimal, growing by degree to 3,500 “advisers” and, most recently, a special operations raiding force. The war that Obama ended now costs, according to a Pentagon estimate released Monday, $11.5m every day. Over the 18 months Obama has waged it, the two-country war has cost over $5.5bn. In Syria, where Obama openly abandoned his own improvised “red line” against chemical-weapons usage, the president rejected a plan to back Syrian militants fighting dictator Bashar al-Assad, then two years later, in 2014, accepted a plan to arm and train Syrian militants fighting Isis, which failed at great expense.

“The Obama administration is careful in its use of language to sell warfare as something less: the Libya regime change intervention was ‘a time-limited, scope-limited military action’; the open-ended bombing of Isis ‘a very significant counter-terrorism operation’; and US troops are never ‘in combat’, but rather deployed to ‘dangerous places’,” said the Council on Foreign Relations’ Zenko.

“This is all intended to define-down warfare so it appears like less of a military commitment, less costly, and less deadly.”

While renewing his pledge to “destroy” Isis, Obama struck more sanguine tones about Isis in his speech. He described a force that has ruled territory home to six million people for 18 months as “masses of fighters on the back of pickup trucks and twisted souls plotting in apartments or garages”.

Since Isis does not “threaten our national existence” – a high bar for any non-nuclear country – Obama warned against trying to “take over and rebuild every country that falls into crisis”, though he neglected to mention his elective 2011 war in Libya that traded the dictator Muammar Gaddafi for a vacuum. “It’s the lesson of Vietnam, of Iraq, and we should have learned it by now.”

The persistence of the Afghanistan and Iraq-Syria wars stands alongside Obama’s well-known proliferation of global drone strikes and counter-terrorism raids, which received only oblique references in the State of the Union.

The pace of the “shadow wars” on undeclared battlefields in the Middle East, South Asia and Africa ebbs and flows: US strikes in Pakistan sank to 13 in 2015, the lowest of Obama’s tenure, while the US launched more strikes in Yemen and Somalia in 2015 than 2014. The architecture of drone strikes is more permanent: the US military recently opened drone launchpads in Cameroon and Niger, while shuttering one in Ethiopia. For much of the world, the drone strike, not the Iran deal, is Obama’s legacy.

Whether the Iran deal itself amounts to a measure for peace is, like everything else about the historic accord, open to debate.

Tehran is slated to enjoy its first wave of sanctions relief within days, after it finishes decommissioning a heavy-water reactor at Arak. The gamble the nuclear deal represents is Obama’s most aggressive attempt at something like peace. Preventing a nuclear Iran without war lowers the stakes of a mass-casualty event in the Middle East substantially and eliminates the prospect for nuclear blackmail from a regime with a decades-long record of regional destabilization.

Yet the deal is something less than a gamble for peace. The administration has relentlessly insisted that the deal is surrounded by a sort of geopolitical hermetic seal, designed to tackle Iran’s nuclear development without addressing any of the broader portfolio of US grievances with Iran, from regional destabilization to sponsorship of terrorism. Any talk of detente is premature, as Iran has vowed to continue ballistic missile tests that are outside the scope of the deal, and Obama is said to be readying new sanctions in response.

The US’s traditional allies in Saudi Arabia and the other Gulf petro-monarchies, aligned with Israel in their relentless fear of Iran, believe it to be in breach of a decades-old US security guarantee. As client states often will, they have raised the political cost to Obama, to the frustration of administration officials who bristle at Saudi intransigence over a deal designed to take the world’s most powerful weapon away from Riyadh’s premier enemy.

The clearest signal Obama has sent to accommodate Saudi Arabia has sacrificed Yemen, already the locus of an intense, secretive campaign of drone strikes for years. For a year, the Saudis have relentlessly bombed Yemen to oust the Iran-aligned Houthi movement that overthrew a US-backed regime. It has done so with US backing.

That campaign has been anything but discriminating. The Saudi strikes have killed nearly 2,800 civilians, according to a United Nations estimate, and wounded 5,300 more. Yet in March, the White House announced the establishment of a planning cell with the Saudis to coordinate “US military and intelligence support”. In November, as international humanitarian condemnation of the Yemen bombing was rampant, the State Department approved the sale of $1.3bn worth of air-to-ground weapons. The Saudis have even bombed hospitals, as the US did in Kunduz in October, and Human Rights Watch last week documented evidence of the Saudis using old US-provided cluster bombs, weapons that most of the world has banned because they can remain deadly for years after a conflict ends.

The Yemen war received no mention in the State of the Union.

Obama tends to pride himself on his aversion to the hysteria that often characterizes foreign affairs discourse, an asset at the core of his anti-Stupid Shit doctrine. But a lesson of his presidency is that there are many varieties of stupidity. Some of it involves embracing, escalating or restarting conflicts without an ability to achieve their result. Other varieties involve rejecting Stupid Shit only to reluctantly embrace it past the point it might have made a difference, as in Syria, or helping overthrow a government without any plan for the day after, as in Libya.

Perhaps the most tragic legacy is how an effort to delicately calibrate a precise use of deadly force – the endeavor animating Obama’s reliance on drones and special operations forces – still looks indiscriminate to those caught up in its power. A young Yemeni activist educated in the US had little patience for Obama’s rationalizations about drone strikes after one hit his village. In 2013 congressional testimony that helped place Obama’s legacy in context, Farea al-Muslimi told a Senate panel how drone fears are so entrenched that Yemeni parents use the threat of them to get unruly children to go to bed.

“When they think of America,” Muslimi testified about a method of war championed by a president with a Nobel peace prize, “they think of the terror they feel from the drones that hover over their heads, ready to fire missiles at any time.”

This article was published on the Guardian