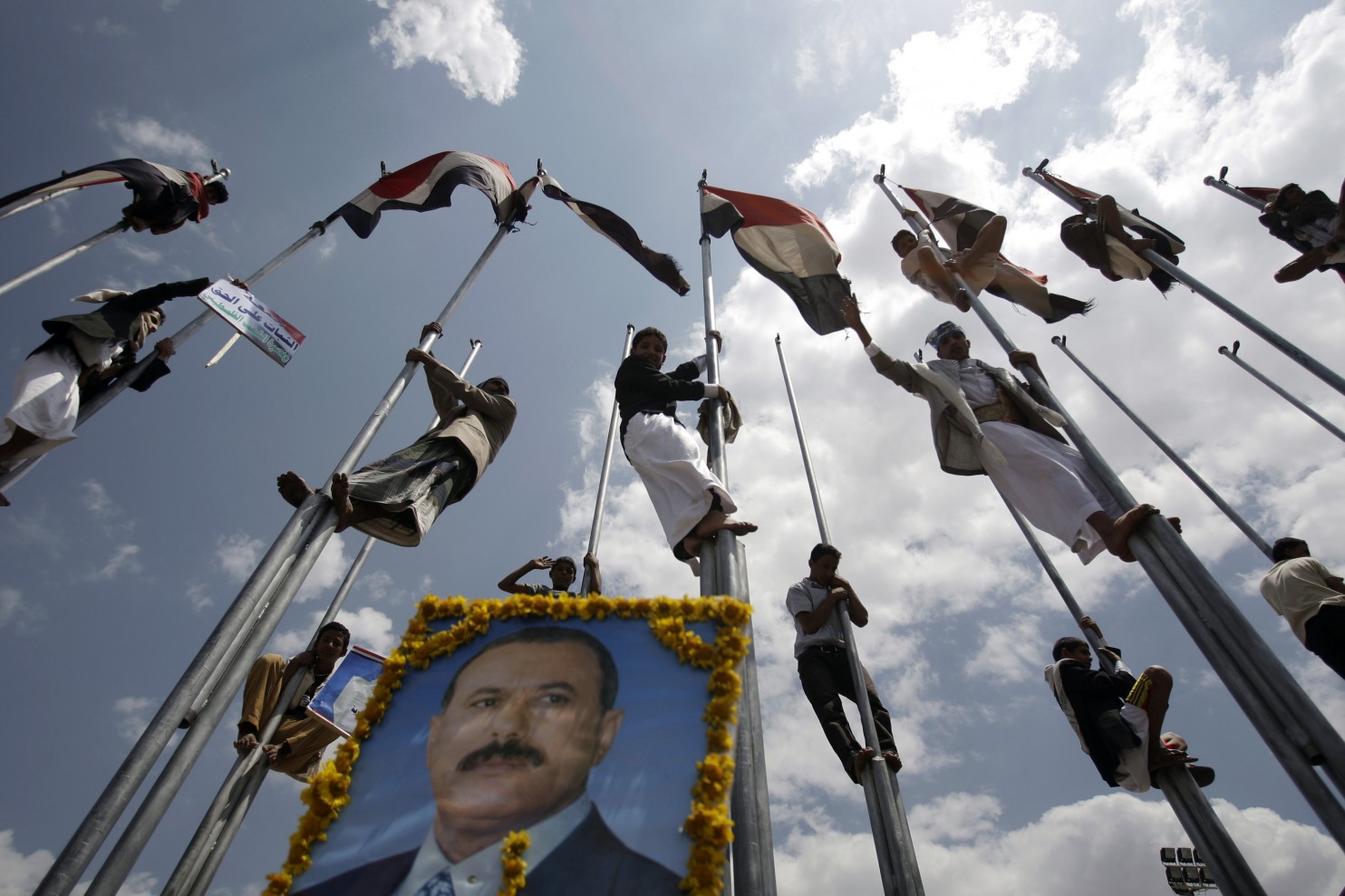 A key player in Yemen’s political chaos? A strongman ousted in 2012.

SANAA, Yemen — For more than three decades, Ali Abdullah Saleh had a firm grip on power in this destitute Arabian nation, winning a civil war, deftly managing restive tribes and outwitting political opponents. Then an uprising forced him from the presidency in 2012.

“I was very right to hand over power,” Saleh said during an interview Tuesday in the courtyard of his sprawling residential compound. He says he spends his time these days reading and doing physical therapy to recover from wounds sustained during the uprising.

But many Yemenis believe that Saleh never really relinquished his power. He is widely accused of using his wealth, family connections and influence over the military and tribal leaders to aid an insurgency that toppled the U.S.-backed government of President Abed Rabbo Mansour Hadi last month.

Now, as Yemen faces an uncertain future that could include civil war and the breakup of the country, the 72-year-old former president is a major player, according to critics, analysts and foreign diplomats. The reverberations of the crisis go well beyond Yemen: The U.S. government fears that the tumult could strengthen al-Qaeda-linked rebels and harm an American drone program that targets them.

In a further sign of the country’s worrisome trajectory, Britain and France said Wednesday they would close their embassies in Yemen. The decisions came a day after the United States announced similar plans.

“Saleh handed over the presidency, but he did not hand over power,” said Farea Al-Muslimi, a Yemeni analyst and visiting scholar at the Beirut-based Carnegie Middle East Center.

Saleh’s influence was largely left intact because of an internationally backed political transition process that granted him immunity from prosecution and allowed him to remain in the country after he stepped down. He continues to chair the powerful party that he founded, the General People’s Congress.

“It’s clear to everyone that he has had a role in this mess,” said a Western diplomat who is based in the region, speaking on the condition of anonymity. “There is no doubt that this was a joint venture with the Houthis.”

The Houthis, who are followers of the Zaydi branch of Shiite Islam, captured the capital of this majority-Sunni-Muslim country in September and steadily tightened their grip on politics. On Friday, the group dissolved the parliamentand announced the formation of a transitional government. The U.S. government announced Tuesday that it is closing its embassy in Sanaa because of the security situation.

In the interview, Saleh, who wore a navy pinstriped suit and insisted on handing out fruit to guests, denied accusations that he aided the Houthi takeover or played a role in Yemen’s current unrest. He called such accusations “propaganda” issued by rival political parties.

Nonetheless, he acknowledged that he remains active in politics —holding daily discussions with officials and tribal figures at his home, a walled compound with scores of security guards.

Saleh said he has never interacted with Houthi leader Abdulmalik al-Houthi. But the former president’s party is involved in a U.N.-backed dialogue with the Houthis and other groups, aimed at a political resolution of the crisis. Saleh said he hoped to persuade the rebel group to reverse the decision to dissolve the parliament.

If anyone was to blame for the crisis, he said, it was Hadi. “It’s only natural that the Houthis are in control due to the absence of a strong state,” said Saleh, citing Hadi’s “weakness” as the reason for the takeover.

Analysts agree that public discontent with Hadi was, in fact, one reason the Houthi fighters were able to enter the capitalnearly unopposed. Corruption was seen as rife, and his government had made little progress in reviving a crippled economy. Hadi had also alienated many military officers by trying to restructure the armed forces, they say.

But there had been signs since Hadi took over that Saleh may have been encouraging unrest.

In November, the U.N. Security Council slapped sanctions on Saleh and two Houthi rebels leaders, charging that they were obstructing the political process and threatening Yemen’s stability. In the interview Tuesday, Saleh described the U.N. sanctions as a political maneuver backed by the U.S. government.

Abdul-Ghani al-Iryani, a Yemeni analyst, said that Saleh loyalists, including former military officers, started training with Houthi fighters in the rebels’ northern stronghold about the time that Hadi became president in early 2012.

“He sent former officers to work with the Houthis, and then, last year, the officers joined the Houthis in taking the capital,” Iryani said.

Saleh also persuaded a variety of mainly Zaydi tribes in the north to back the Houthis, Iryani said. Those tribes often compete with each other for influence. But Saleh, who is a Zaydi, exploited their concerns over losing influence in Hadi’s government, he added.

There is no love lost between Saleh and his successor in the presidency. Hadi dissolved the powerful Republican Guard that was led by Saleh’s son, Ahmed, who was being groomed for the presidency before the 2011 uprising.

Just a few years ago, an alliance between the Houthis and Saleh might have seemed a remote prospect. When he was president, Saleh waged six brutal wars to stop a Houthi insurgency that was fueled by anger over government neglect of their region.

But officials in the rebel movement say they are willing to move beyond those conflicts.

“We don’t have personal problems with anyone,” said Deif Allah al-Shami, a Houthi political leader.

Many analysts see signs of a mutually beneficial relationship between Saleh and the Houthis. During their September attack on the capital, for example, the Houthis overran the forces of Maj. Gen. Ali Mohsen al-Ahmar, who turned on Saleh during the 2011 Arab-Spring-inspired uprising and sided with the opposition.

“Ali Abdullah Saleh wants to vanquish his opponents to reemerge as the national leader, and the Houthis have been subcontracted as the means for doing that,” said Saeed al-Airi, a member of a rival political party, known as al-Islah.

Saleh rejected those accusations, saying he has no ambition to return to the presidency or to install his son in the job. But he alluded to where his true interests lie.

These days, he takes daily swims in his pool. A visitor asked whether he enjoyed them. Saleh shook his head and said with a smirk, “I’m one who swims in politics.”

Ali al-Mujahed in Sanaa contributed to this report.