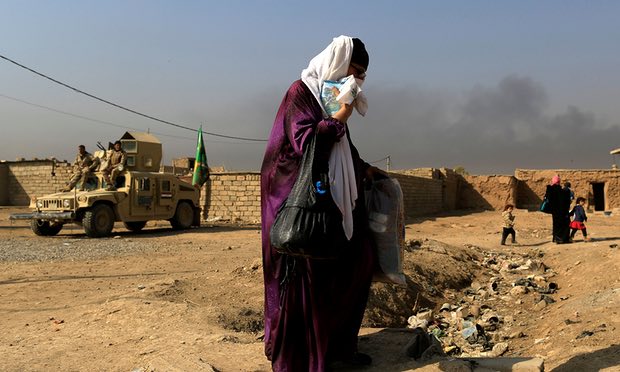 Mousa al Mosawy’s mother woke him this week with a call from Iraq, frightened and in floods of tears. She was afraid not of attacks at home, but that a new US law could end her son’s education or stop her from seeing him for years.

Donald Trump had not yet signed his executive order calling for “new vetting measures” to keep “radical Islamic terrorists” out of the United States.

But early reports that the US president planned to ban citizens of seven mainly Muslim countries from entering the US looked like they would directly affect Al Mosawy, an Iraqi citizen studying law at Boston College on a student visa.

“My mother was quite disturbed by this,” he said. After he had consoled her and hung up, he began the far more difficult task of quieting his own fears about the executive order on immigration.

It included severe restrictions on immigration from those seven countries, implemented a 120-day halt to all refugee admissions and an indefinite ban on all refugees from Syria.

Al Mosawy, 24, is a wheelchair user and believes he would have little hope of finishing his education or launching a career if he were forced to return home.

“I’m from Iraq, I don’t have residency in any other country, so for me [being forced to leave the US], would mean going back to Iraq,” he said in a phone interview.

“I have a disability and I think if I am not able to stay in this country I will not be able to finish my education. So it would be basically be a full stop to my career.”

Al Mosawy said the conflicting early reports and rumours about how the new controls might work were even more frightening than the draft version that was leaked, which called for an initial 30-day ban on visas for Iraqis. The final order made that ban 90 days long.

It is far from clear how a screening process might work and the overall message sent out by the order is chilling, particularly for someone who has always felt welcome in America.

“It was a stark contrast to what I had experienced previously,” Al Mosawy said. “It’s not like Muslims have not faced persecutions or harassment in the US, I just was privileged not to personally deal with that and felt very welcomed.”

Trump’s election campaign was shot through with attacks on Muslims, including proposals to create a registry of American Muslims, plans for a ban and the hounding of a Gold Star family whose son died for his country.

But activists and analysts, many of whom have risked their own lives to push for democracy at home, warn that the order will still damage America’s soft power, built on its role as a champion of freedom.

“For civil society, for democracy, for everyone who believes in freedom, it’s a big blow, and for Americans themselves, not just for the world,” said Farea Al-Muslimi, Yemeni activist and co-founder of the Sana’a Center for Strategic Studies.

Anticipation of the new executive order had in effect grounded Al-Muslimi and his staff, who travel regularly to the US, though ironically it may mean little in practical terms for Yemenis at home.

The Saudi-led coalition backing one side in the raging civil war has in effect closed the main airport, meaning no one can leave anyway, he said.

The executive order may also diminish support for another of Trump’s stated priorities, the global battle against extremism, by targeting countries on the frontline. Both their support and their knowledge may be lost to Washington, if their citizens are prevented from travelling.

“I cannot think of another country that has given more in the fight against the Islamic State,” said Rasha Al Aqeedi, a research fellow at Al Mesbar Studies and Research Center and an Iraqi citizen.

She pointed to hundreds of lives lost in the recent difficult push to dislodge the terror group from its biggest Iraqi base, the city of Mosul. The battle has been grinding on for months, and could last into the spring.

“I feel including Iraq in a ‘terror prone’ states list disregards the thousands of lives sacrificed over the past 100 days to liberate half of Mosul.”

For Syrians who have been fighting both Isis and the autocratic rule of President Bashar al-Assad for over half a decade, rejection by a country that once hailed their fight for greater accountability is particularly bitter.

“We need to be clear that the US is not willing to pull its weight or stand by its principles as a democracy,” said Salim Salamah, director of the Palestinian League for Human Rights – Syria, and twice a refugee. He grew up in a camp for Palestinians in Syria, and then fled Syria for Europe during the civil war.

“I think one of the most scary aspects of the executive order is that it’s clearly indicating that part of the vetting process [for refugees seeking settlement in the US] is going to be based on religious beliefs, which ignores the fact that Muslims themselves have been the victims of radical groups.”

Even before details of the executive order were released, it had begun affecting the work of activists such as Nadwa Al-Dawsari, a Yemeni citizen working in the US as a conflict analyst and fellow at the Project on Middle East Democracy.

She provides vital understanding of a country that is home to both an al-Qaida franchise and a committed opposition, and where US weapons are fuelling the brutal civil war.

“I just cancelled an upcoming trip to Yemen because I worry that I won’t be allowed back into the country,” Al-Dawsari said, adding that in practical terms the blowback would be felt by the US itself.

“What Trump is doing is simply a blanket statement that everyone who comes from these countries is a potential terrorist. The implications of that for US counter-terrorism policy in Yemen are certainly a cause of major concern for democracy, for freedoms, and even for counter-terrorism efforts.”

That concern is shared by Erica Gaston, a human rights lawyer who has over a decade’s experience in Afghanistan and Yemen.

“We have important national security and humanitarian interests in countries like Yemen, Iraq and other ‘named countries’. Working with our local partners to address the security challenges there is more important than ever, and travel and exchange are a big part of that dialogue,” said Gaston, a US citizen working at the Global Public Policy institute in Berlin, Germany.

“This is not just a question of limiting opportunities for citizens of these countries, although that is certainly true. It is critical for US policy that Yemenis, Iraqis, or other citizens of these countries are able to travel to the US to share what is happening on the ground, upcoming security threats that the US should be aware of, or possible solutions we might work together on.”

This article was published on the Guardian