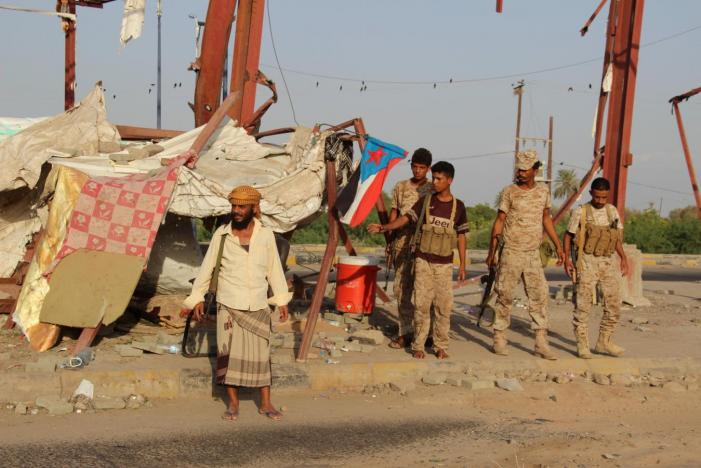 Yemen has endured thousands of air strikes and the deaths of more than 10,000 people in a 19-month war that has also unleashed hunger on the desperately poor country – but its biggest challenge may be yet to come.

The conflict has led to Yemen’s de facto partition, with rival armies and institutions in the north and south, and could mean the map of the Middle East will have to be redrawn.

But behind the combatants’ disagreements over how to share power, Yemen’s future as a unified state appears increasingly in doubt.

Such a possibility appeared remote when a coalition of Arab states began launching air strikes in March 2015 to restore to power President Abd Rabbu Mansour al-Hadi, driven from the capital, Sanaa, by the Iranian-allied Houthi movement in 2014.

The Houthis’ rise to power in the north has provoked a revival of southern separatism, a movement that sees the fracturing of state power as its moment to break away.

At the same time, the south and its major city, Aden, serve as a base for the internationally recognized government, which is trying to take back national control even as it manages an uneasy alliance with the secessionists.

Yemen was once split between a pro-Soviet state in the South and a republic buttressed by armed tribes in the North. A southern bid to secede failed in 1994 when the north restored unity by force.

Many southerners now believe their time has come after two decades of what they see as marginalization within the unified state, and the plundering of mostly southern oil reserves by corrupt northern tribal sheikhs and politicians.

“THE BLOOD OF HER SONS”

Southern soldier Faisal al-Salmi says he and his comrades are ready to die to be rid of the northerners.

“We have become an independent state thanks to God and the leadership of the Arab coalition … southern lands have been liberated by the blood of her sons and have loosed the bonds of unity which brought only terrorism, cronyism, and the looting of the people’s wealth,” Salmi told Reuters.

But a split could bring more instability along one of the world’s busiest shipping lanes, perhaps by setting the scene for a fight over the south’s oilfields, or by triggering, as in 1994, efforts by the north to dominate the south.

For now, both sides appear to be setting up parallel institutions that could pave the way for an enduring divorce.

The government said it moved to Aden from Saudi exile in September while the Houthis formed their own government in Sanaa this month.

Seeking to bar the Houthis from using state funds to finance their war effort, Hadi ordered central bank to be moved to Aden – which will hurt the Houthis but risks economic instability and even famine.

“The Houthis realize they probably won’t reconquer southern lands, so have strengthened their base with its own administration, while the government wants as many state tools under its control and serving its interests as possible,” said Yemeni analyst Farea al-Muslimi.

“But moves like these deepen distrust on both sides and delay negotiations which everybody realizes are the only way to end the conflict,” he added.

Paradoxically, neither rival administration says it seeks a partition but rather styles itself the legitimate heir to a unified country to follow the war.

While Hadi may wish to extend his writ to Sanaa, the army commanders who have built up southern forces and made progress against al Qaeda and Islamic State are veteran secessionist guerrillas with no interest in the North.

Despite financial and military support to these breakaway southern units, key coalition countries Saudi Arabia and the United Arab Emirates will seek to avoid a split.

“We realize that they have their own interests in supporting us because our forces are effective against the Houthis,” a southern politician told Reuters on condition of anonymity.

“They are worried that a break-up of Yemen into two states on their borders will lead to instability, but we know that separation is the only way to make a just peace.”

But senior Houthi official Mohammed Abdul Salam accused the United Arab Emirates, which is influential in the south, of encouraging separatism to advance its war goals.

“The hereditary rulers of the UAE are clearly and blatantly advancing a separatist agenda,” Abdul Salam said this month.

The coalition insists its aim is to restore a national government for the whole country in Sanaa, in the shape of Hadi’s internationally recognized administration.

Whether the North or South would be viable states is open question.

Deeply impoverished and beset by tribal feuds and militant attacks even before the war, Yemen’s economy shrank by about 28 percent in 2015, according to government statistics.

An Emirati-backed rout of al Qaeda militants at their base in the port of Mukalla in April cheered southerners, but bombing attacks continue to target security leaders and bases, while regional rifts and squabbles over strategy among secessionist leaders cloud the way forward.

The Houthis, though they hold sway over most of Yemen’s population centers, do not control the oil-producing regions whose wealth once accounted for most of Sanaa’s budget.

Cut off from Yemen’s foreign exchange reserves by the central bank’s move to Aden, Sanaa’s own version of a central bank now faces the hard task of guaranteeing food imports that have staved off famine for millions.

“The humanitarian situation is so critical that there needs to be an immediate ceasefire, deliveries of aid and a political resolution,” a senior diplomat dealing with Yemen told Reuters.

“Whether it’s one state, two states or something else, Yemen’s warring sides need an agreement on the future of the country or the only thing they will be sharing is graves.”