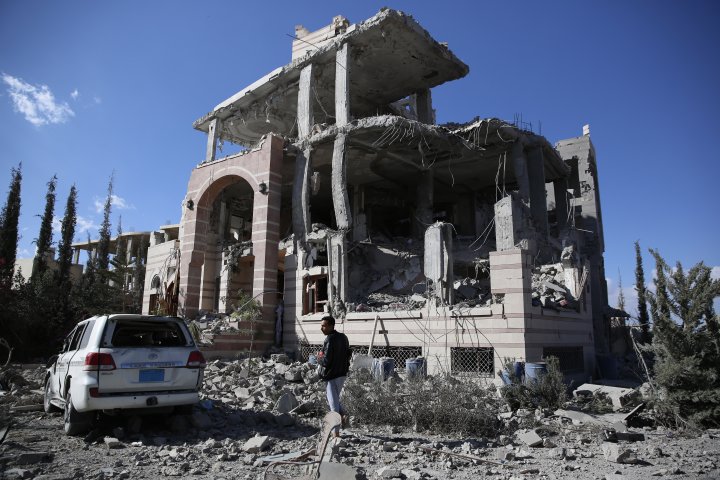 When an airstrike hit near the Iranian embassy in Sanaa on Friday, the incident underscored a harsh political reality: Saudi Arabia and Iran are locked in a spiraling regional showdown, and few places will suffer more than Yemen.

The renewed tensions that followed Saudi Arabia’s announcement on Jan. 2 that it executed 47 people, including a leading Shiite cleric, are adding more fuel to the fighting in Yemen, where nearly 6,000 people have been killed since Saudi Arabia launched a military campaign in the country in March 2015.

In reaction to the execution of sheikh Nimr Al-Nimr—a preacher critical of the Saudi regime—protesters stormed the Saudi embassy in Tehran. The Saudis countered by severing diplomatic ties with Iran. It was an escalation in tensions between states engaged in a power struggle playing out on battlefields across the region.

The fighting in Yemen has already intensified, with residents of the capital, Sanaa, reporting the heaviest bombing to date by Saudi-led warplanes. Peace talks planned for this week have been postponed. An airstrike near the Iranian embassy appears to have struck nearby, although Iran initially accused Saudi Arabia of bombing the compound directly.

The escalation is one illustration of an increasingly lethal rivalry between Saudi Arabia and Iran, with the two powers backing opposing factions in Syria, Lebanon, Iraq, and Bahrain.

Some Yemenis see their country as increasingly engulfed by a confrontation between the two regional powers. The turmoil which began following Yemen’s 2011 pro-democracy uprising first transformed into civil war and is now an internationalized conflict, one that continues to claim the lives of numerous civilians and has plunged millions into a humanitarian crisis.

“This is a war one year ago you could have—maybe one and a half year ago to be accurate—you could have solved it domestically. But right now, even if all Yemenis come to one table and say ‘we want peace’ the decision is no longer in their hands,” says Farea Al-Muslimi, a Yemeni analyst and visiting scholar at the Carnegie Middle East Center, speaking by phone from Beirut.

“For peace to possibly exist in Yemen, it will have to get at least the consensus of at least Saudi Arabia and Iran,” he says.

The war in Yemen began in the turmoil spawned by a popular uprising in 2011 against Ali Abdullah Saleh, a U.S. and Saudi-backed autocrat. Saleh ultimately left power under a transition plan signed in 2011 and backed by the Gulf Cooperation Council, a group of Arab states. Under the transition, Saleh’s vice president, Abed Rabbo Mansour Hadi became president in 2012.

The Houthis, Shia tribes from the north of the country that had fought several wars with the Saleh government, opposed the agreement. In 2014, the Houthis overran Sanaa, and forced Hadi to flee the country on March 25, 2015.

Backed by the U.S. and flanked by a coalition dominated by Gulf Arab states, Saudi Arabia launched its war in Yemen the day after Hadi’s departure. The campaign has exacted an immense human toll. Over nine months of war, Saudi-led coalition warplanes have bombed hospitals and weddings. The coalition placed Yemen under a blockade, cutting vital supplies of food and medicine. Nearly 2,800 civilians have been killed, close to half of the overall death toll, since the Saudi campaign began.

Of course, Saudi Arabia and its allies are not blamed for all of the casualties, but they stand accused of some of the most grave abuses. Last week, Human Rights Watch reported that Saudi-led coalition forces dropped cluster bombs on residential areas in Sanaa, an act the group said could amount to a war crime.

Arrayed against the Saudis are the Houthi rebels and their allies within Yemen. The Houthis are a movement committed to Zaidism, which is an offshoot of Shiite Islam and aligned with Iran. Some Saleh loyalists have also entered an alliance of convenience with the Houthis.

The nature and scope of Iranian support for the Houthis is a matter of debate. Iran is the principal Shiite power in the region whose regime claims the legacy of the 1979 revolution, which the Houthis are said to admire. Iranian support for the group, according to officials cited by Reuters, is reported to include money and weapons. But questions remain about the scale of that aid. “Iran’s military role is negligible and Iran can’t ship weapons to the Houthis in large quantities,” said Alireza Nader, a senior policy analyst at the RAND Corporation.

In other words, while both Saudi Arabia and Iran are involved in Yemen, their involvement is imbalanced. Al-Muslimi, the Yemeni analyst said, “If Saudi suddenly stops supporting Hadi, how long does he have in power? Maybe a few days a few days? A few weeks maximum, but if the Iranians stop supporting the Houthis, I think they’ve got at least a few years in power,” he said. “They’re a group that you cannot ultimately deny their local roots.”

But Iran could be tempted to exploit the asymmetrical dynamic in Yemen, playing the role of the spoiler. In Yemen, the two rivals occupy the opposite of the roles they play in Syria, where Iran backs the regime and the Saudis support some rebel groups.

“Iran’s role in Yemen remains limited and low-cost. But the gloves are off now. If the Saudis double down on turning Syria into Iran’s Vietnam, the Iranians could try to do the same with Yemen. Their options, however, are as limited as access is to Yemen is restricted,” said Ali Vaez, a senior Iran analyst at the International Crisis Group.

And the Saudi-led coalition has taken extraordinary measures to limit that access. In April 2015, when an Iranian jet ignored orders to turn back from the Yemeni capital, coalition jets bombed the runways at Sanaa’s airport.

Meanwhile, with the conflict grinding on and the Saudi and coalition-imposed blockade limiting supplies of food, fuel, and medicine, the reality of the Saudi-Iranian conflagration is one of daily suffering for Yemenis. “It will be a larger catastrophe,” says Al-Muslimi.

This article was published on the Time