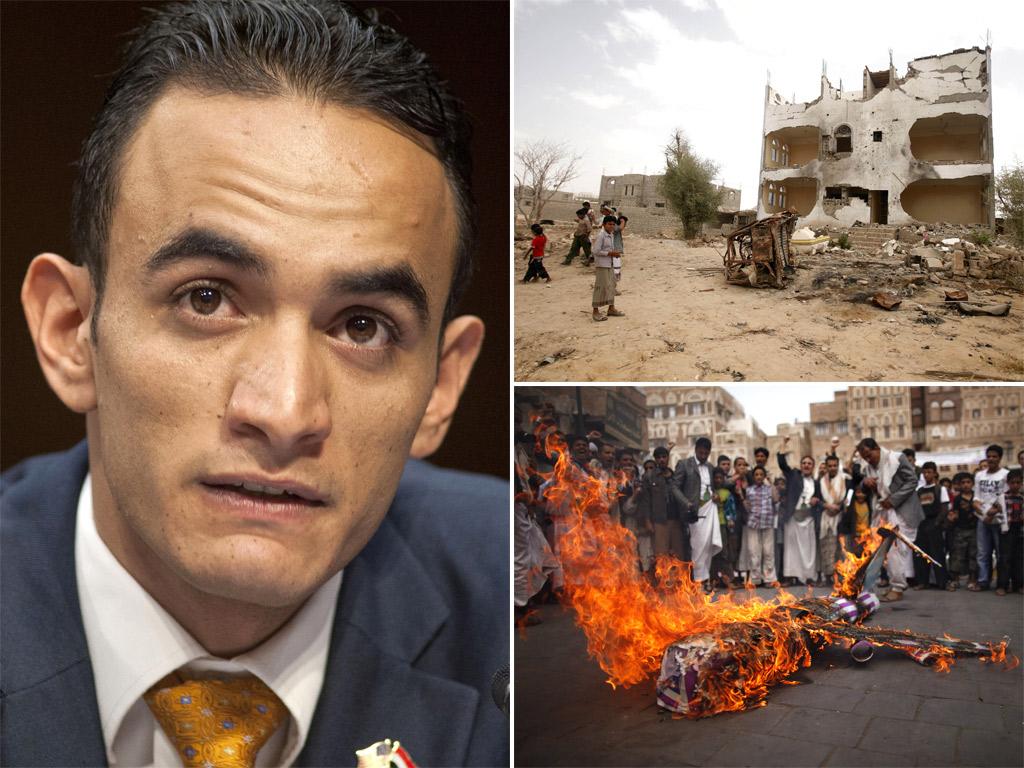 Just six days after a US drone bombed his village, killing five militants in the process, a 23-year-old Yemeni writer named Farea Al-Muslimi travelled to Washington D.C. to tell the US Senate about the impact the strikes are having in his country.

In a powerful testimony to the assembled senators on Tuesday, excerpts of which are printed below, Mr Al-Muslimi said that rather than fighting terrorism, US drone strikes in his country were fuelling it. He told the committee that he owed much to America, having first visited as an exchange student during his school years, and later won a scholarship to study for a semester at a US college. But he came with a simple request: that the US stop bombing his country.

“My name is Farea Al-Muslimi. I am from Wessab, a remote mountain village in Yemen, about nine hours’ drive from my country’s capital, Sana’a. Most of the world has never heard of Wessab. But just six days ago, my village was struck by a drone, in an attack that terrified thousands of simple, poor farmers. The drone strike and its impact tore my heart, much as the tragic bombings in Boston last week tore your hearts and also mine.

I am here today to talk about the human costs and consequences of targeted killing by the United States in Yemen.

My family lives off the fruit, vegetables, and livestock we raise on our farms. We raise cows, goats, sheep, and hens. My father has been a farmer all his life. His income rarely exceeds $200 per month. He learned to read late in life, but my mother never did.

I have 12 living siblings. I should actually have 19, but we lost seven of my brothers and sisters. Some passed away in delivery due to a lack of quality medical services in our village. Others passed away when they were still young for the same reasons.

My life changed forever in the 9th grade when I was awarded a scholarship from the US State Department. The scholarship gave me an opportunity to study English for one year at Amideast, the American English Center in Yemen. This scholarship gave me new opportunities and allowed me to see the world beyond my village for the first time. I was later awarded a State Department scholarship to the Youth and Exchange Study program, which aims to build peace and understanding between the American people and people in Muslim countries.

That scholarship allowed me to spend a year living with an American family and attending an American high school. The year I spent at Rosamond High School in Rosamond, California was one of the richest and best years of my life.

The most exceptional experience was coming to know someone who ended up being like a father and is my best friend in the United States. He was a member of the US Air Force. Most of my year was spent with him and his family. He came to the mosque with me and I went to church with him. He taught me about his experiences in America and I taught him about my life in Yemen. We developed an amazing friendship that overcame our very different backgrounds.

A drone strike in my village

Just six days ago, this so-called war came straight to my village. As I was thinking about my testimony and preparing to travel to the United States to participate in this hearing, I learned that a missile from a US drone had struck the village where I was raised.

My village is beautiful, but it is very poor and in a remote part of Yemen. In the past, most of Wessab’s villagers knew little about the United States. My stories about my experiences in America, my American friends, and the American values that I saw for myself helped the villagers I talked to understand the America that I know and love. Now, however, when they think of America they think of the terror they feel from the drones that hover over their heads ready to fire missiles at any time.

In my work with foreign journalists, I have visited many areas struck by drones or warplanes that residents believe were dispatched as part of the targeted killing program conducted by the United States. I have traveled most frequently to Abyan, an area in southern Yemen, which had been seized in early 2011 by Ansar Al-Sharia, a group aligned with AQAP.

In Abyan and other places in Yemen, I visited many locations where local residents were suffering from the consequences of targeted killing operations. I have met with relatives of people who were killed by drone strikes as well as numerous eyewitnesses. They have told me how these air strikes have changed their lives for the worse.

In early March 2013, I was working with Newsweek in Abyan when I met the mother of a boy named Muneer Muhammed. Muneer, an 18 year old boy, transported goods for shops via his donkey in the local souk of Ja’ar town. He had recently been engaged and was preparing for his wedding. Muneer was at work when a missile hit and killed him in May 2012. She told me, in tears, that if she ever meets the individual who shot the missile, she will “crunch him into pieces” in her mouth.

The people with whom we spoke in Abyan told us that Muneer was not a member of AQAP. But that has not stopped AQAP from trying to use his death to recruit supporters to their cause.

Days after Abyan was freed from AQAP control in June 2012, I met a fisherman named Ali Al-Amodi in a hospital in Aden. The day before, his house in Shaqra, on the sea side of Abyan, was targeted by a US air strike. Al-Amodi told me that he stood helplessly as his 4 year old son and 6 year old daughter died in his arms on the way to the hospital.  Al-Amodi had no links with AQAP. He and other locals said that his house was targeted by mistake. In that same strike, four other children and one woman were killed. Witnesses said none were militants.

Later in June 2012, I visited Al-Makhzan, a town outside of Ja’ar, where a drone strike targeting Nader Al-Shadadi took place. Al-Shadadi is identified by the Yemeni government as a terrorist and a leader of Ansar Al-Shariah. He has been targeted at least three times in different places, but the strikes have missed him every time. This time, it targeted his aunt’s house. Neighbors say he was not there, and his aunt’s only son was killed. There is no evidence that the son was affiliated with AQAP.

I know that some policy makers in the United States and Yemen claim that AQAP does not use drone strikes as a tool to recruit more people to their cause. This is incorrect. The case of the Toaiman family in Mareb, as reported by NPR based on a trip in which I participated, is one specific example. The Toaiman’s oldest son joined AQAP hoping to avenge the death of his father, an innocent civilian killed by a drone strike in October 2011. The son has 28 brothers waiting to do so as well. One of his youngest brothers, a 9 year old, carries a picture of a plane in his pocket. The boy openly states that he wants revenge and identifies his father’s killer as “America.”

I don’t know if there is anyone on Earth who feels more thankful to America than me. In my heart I know that I can only repay the opportunities, friendship, warmth, and exposure your country provided me by being their ambassador to Yemenis for the rest of my life, just as I was an ambassador for Yemenis in America. I strongly believe that I have helped improved America’s image, perhaps in ways that an official ambassador or other diplomat cannot.

I have to say that the drone strikes and the targeted killing program have made my passion and mission in support of America almost impossible in Yemen. In some areas of Yemen, the anger against America that results from the strikes makes it dangerous for me to even acknowledge having visited America, much less testify how much my life changed thanks to the State Department scholarships. It’s sometimes too dangerous to even admit that I have American friends.

Late last year, I was with an American colleague from an international media outlet on a tour of Abyan. Suddenly, locals started to become paranoid. They were moving erratically and frantically pointing toward the sky. Based on their past experiences with drone strikes, they told us that the thing hovering above us – out of sight and making a strange humming noise – was an American drone. My heart sank. I was helpless. It was the first time that I had earnestly feared for my life, or for an American friend’s life in Yemen. I was standing there at the mercy of a drone.

I also couldn’t help but think that the operator of this drone just might be my American friend with whom I had the warmest and deepest friendship in America. My mind was racing and my heart was torn. I was torn between the great country that I know and love and the drone above my head that could not differentiate between me and some AQAP militant. It was one of the most divisive and difficult feelings I have ever encountered.

As someone who has lived and worked on this issue very closely, I cannot help but feel that the American and Yemen governments are losing the war against AQAP. Even when drone strikes target and kill the right people, it is at the expense of creating the many strategic problems I have discussed today. Every tactical success is at the expense of creating more strategic problems. I do, however, believe that things can still be fixed. If the United States wants to win the battle against AQAP in Yemen, I strongly suggest that it consider taking the following steps:

* Stop all the targeted killing strikes.

* Announce the names of those already on the “kill list,” so that innocent civilians can stay out of harm’s way.

* Issue an official apology to the families of all civilians killed or injured by targeted killing strikes.

* Compensate the families of innocent civilians killed or injured by strikes conducted or authorized by the United States.

* In every village where there has been a targeted killing, build a school or hospital so that the villagers’ only experience with America will not be the death and destruction caused by an American missile.

Thank you very much.

This article was published on the Independent