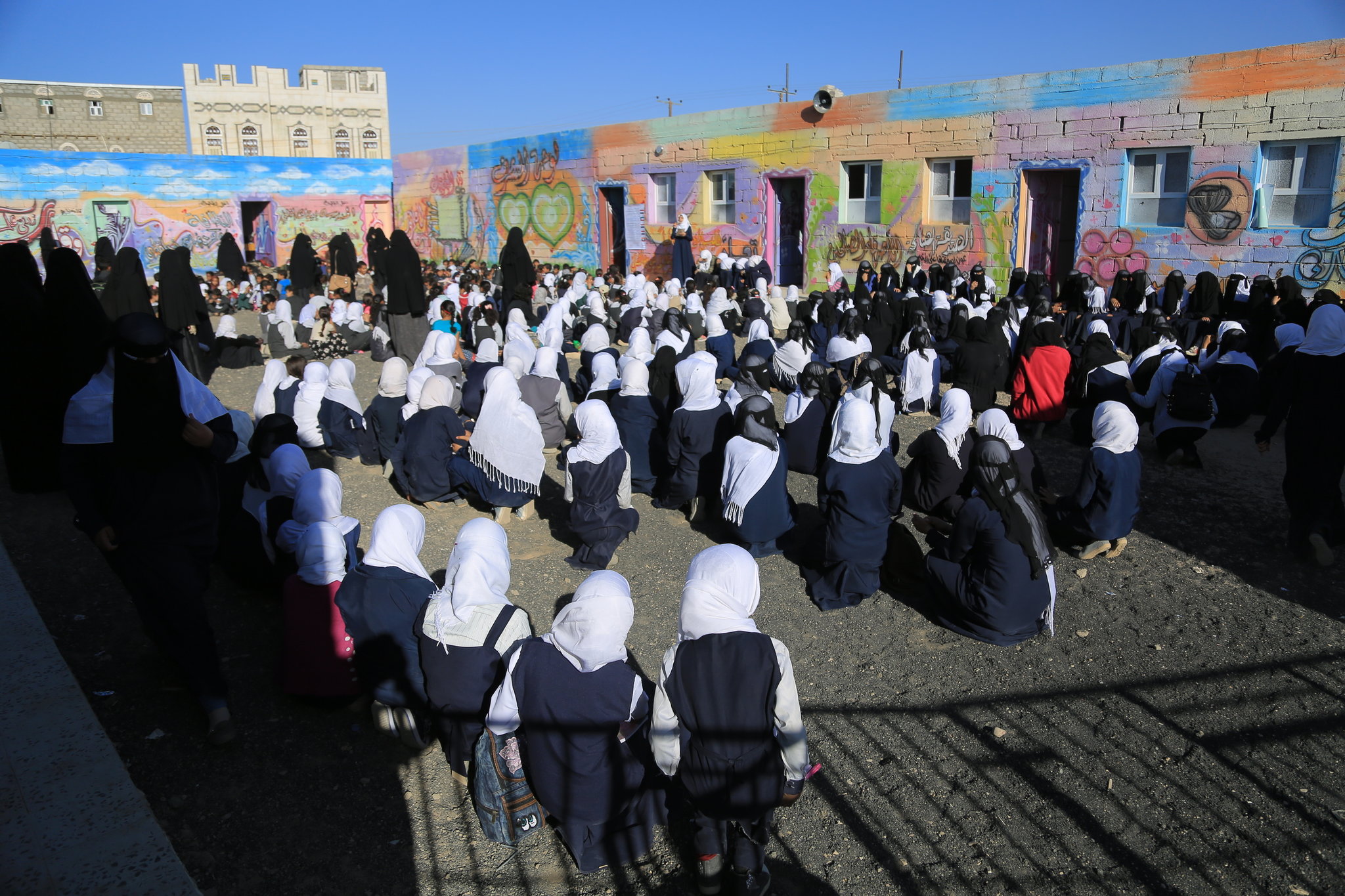 As Yemen Crumbles, One Town Is an Island of Relative Calm

MARIB, Yemen — As much of Yemen slides toward famine, residents of this dusty desert town can now buy food many locals had never tasted before: pizza, hamburgers and ice cream.

And while airstrikes and combat have left piles of rubble in other towns and cities, this one is growing, with cinder-block factories doing swift business and new neighborhoods rising from the sand.

Amid the war that has caused a grave humanitarian crisis in Yemen, the Arab world’s poorest country, Marib is a relative bright spot in a nation with few to offer.

While the country is divided between competing factions, the government of Marib Province has used oil revenues and tribal politics to lessen the blows of war, providing a level of security and services lacking elsewhere. Its relative stability has attracted Yemenis fleeing more violent areas, some of whom have in turn brought money to buy property and start businesses.

“It is a success in exceptional circumstances,” said Abdul-Razaq Naqib, a production supervisor for Yemen’s Safer oil company. “Like digging through rock with your fingers,” he said, using a Yemeni saying for doing the impossible.

During a recent four-day trip to Marib with a group of Western journalists and researchers, I saw a town struggling for a sense of normalcy — and even progress — despite the collapsed country around it.

The trip was organized by the Sana Center for Strategic Studies, a research institute focused on Yemen, and led by Farea al-Muslimi, an energetic young Yemeni scholar, who said he worried that the international community was forgetting about Yemen, to the peril of both.

“We can’t stop the war in Yemen right now, but at least we can cause more conversation about it,” he said. “We want to bring the world to Yemen and bring Yemen to the world.”
Marib’s unlikely success is partly a symptom of the near complete shattering of the Yemeni state, which has left regions to fend for themselves in providing life’s basics for their people.

But the ingredients that make it work — warm ties with Saudi Arabia, oil and gas reserves, and a forward-looking governor — make it unlikely to be easily replicated elsewhere. And despite the progress here, security threats and poverty remain. 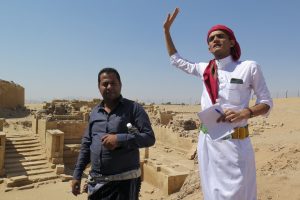 Farea al-Muslimi, right, a Yemeni scholar who organized the trip, took the group to an archaeological site said to be associated with the Queen of Sheba.

Central to Marib’s rise has been the provincial governor, Sultan Al-Aradah, our host, who provided the armed convoy that retrieved us from the airport, guarded our hotel and drove us around.

He clearly wanted to show off his town’s progress while elevating his political profile. It worked. After the local news media reported on our visit, Yemen’s president and prime minister both called to congratulate him.
Marib’s growth has surprised locals.

Until a few years ago, the town had only a few paved roads, and clashes between tribes raged often. The Yemeni branch of Al Qaeda is active in the province, and American drone strikes often kill people thought to be militants.

In May, the United States imposed sanctions on Mr. Aradah’s brother, Khalid, for “providing material and financial support” to Al Qaeda, a charge Mr. Aradah dismissed, saying it had been pushed by political opponents.

Mr. Aradah, a charismatic tribal leader and deft politician, became governor in 2012, when political turmoil was roiling the country. A few years later, Houthi rebels, who had seized the capital, Sana, attacked Marib, surrounding the town until local fighters and airstrikes by Saudi Arabia and its allies pushed them back.

“It was Marib’s fate to confront it,” Mr. Aradah said of the rebel attack. “We tried to face the danger to us with one hand and to build with the other hand.”
Since then, as talks aimed at ending the war have stalled, Mr. Aradah has kept his focus local.

He has a few advantages. Marib Province produces much of Yemen’s oil and gas, and Mr. Aradah’s administration now collects 20 percent of the proceeds, allowing it to pay salaries and finance infrastructure projects.

New roads cross the city, and a soccer stadium is rising downtown that will have turf imported from Germany, local officials said. Mr. Aradah is planning an international airport.

Saudi Arabia has long maintained ties with Marib tribal leaders, including Mr. Aradah, and leads a coalition that is bombing the Houthis and has a base in Marib.

The town’s relative security has attracted Yemenis displaced by the war, and its population has swelled. Precise statistics are hard to come by, but the United Nations says that 73,000 people who fled other parts of the country have settled in Marib Province, in addition to its original population of 340,000. Local officials say the number of displaced is much higher. 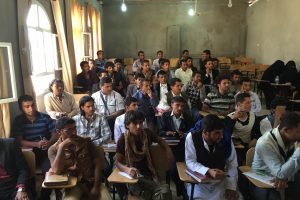 While security concerns prevented us from roaming freely, during tours organized by the governor’s office we saw displaced people crowded into unfinished buildings, covering their windows with plastic and cardboard.
Local historic sites associated with the legendary Queen of Sheba are neglected and strewn with trash. Violence has kept tourists away for years, and they are unlikely to return soon.

At a cultural night in a large tent near the governor’s office, a band played, dancers leapt in the sand and a gray-haired man sang mournfully, “Whoever loses gold can find it in a jewelry shop, but whoever loses the homeland land will not find it anywhere.”

Other sites brimmed with optimism.

“Marib has become a refuge for all Yemenis,” said Mohammed Abdul-Khaliq, a media student at the town’s public university who had fled to Marib after the Houthis took over his hometown.
Turmoil had shuttered the university, administrators said, but it reopened last year with 2,700 students. Now it has more than 5,000, and tin classrooms have been erected to handle the overflow.

Students who had fled from elsewhere said they mixed well with locals. I met two young women in black abayas and face veils who were studying physics. One, Rasmiya Matkour, said her family had fled Sana out of fear that they would die in Saudi airstrikes meant for the Houthis.

Her friend, Sheema Mohsin, a Marib native, said she had been amazed at how the town had changed, with new restaurants, better roads and a park for children.

But the war was never far away. On the day of our hospital visit, a rocket believed to have been fired by the Houthis landed in an open area and an explosion of unknown origin killed a young boy. On our first night, a strike that locals assumed to be from an American drone killed four people believed to be Qaeda militants.

On the edge of town, a “martyrs’ cemetery” of sandy graves and simple headstones stretched nearly to the horizon. It did not exist a few years ago, but now holds the remains of hundreds of men, women and children.

At Marib’s general hospital, most of the patients were war victims.

In a workshop, technicians crafted artificial limbs for patients wounded by land mines, and the hospital had taken in so many wounded fighters that young men packed its pediatric ward. 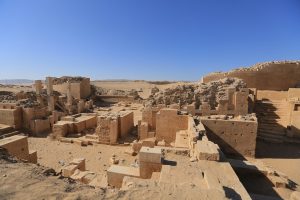 The ruins of the Sun Temple in Marib. Violence has kept tourists way for years, and they are unlikely to return soon.
Six lay on beds in one room. One was covered in bandages and moaning; his car had been blown up as he entered a military base, nurses said. The next had a broken arm and bullet holes in his shoulder. Yet another had been shot through the stomach by a sniper.

Next door were six more men, including Khalil al-Kual, 20, a soldier who had stepped on a land mine, losing his left foot and peppering his other limbs with shrapnel.

“I’ll get a fake limb and go back to the front,” he said.

When asked how the war would end, he replied: “The only solution is with God.”

Mr. Aradah, the governor, said he had worked to increase the rule of law, but problems persist.

A university student, Somaya Sanea, said that her husband, Mohsin al-Awadi, had been dragged from his cellphone shop by security forces after a Facebook post in his name criticized local political figures. His wife and their infant son have not seen him since.

“Even if someone is a criminal, they can’t put him away and not give his family any news,” she said.

Khalid Baglan, the head of a local youth organization, said security forces had attacked him and his colleagues in October when they protested the appointment of a new security chief for the province.

One of his friends died from a gunshot wound, and three are still detained, he said.

Sadam al-Adwar, a local human rights activist, said that such issues appeared to be less common than in other parts of Yemen, but that he knew of more than 10 people who had been detained for apparent political reasons.

“Political cases never ever go to the court,” he said.

Still, the town’s rise has brought other natives home, and highlighted the potential for development in Yemen when basic security can be provided.

Mohammed Zubaiyen, the business manager of large family enterprise with interests across the Persian Gulf, said the family had moved its businesses out of Yemen in 2011 as turmoil spread.

Now, they’re back, launching an $8 million venture to build a new, modern district mixing residential and commercial properties, he said.

Other projects have picked up, too, like the failed mall his family built in 2006. After sitting largely vacant for years, its 104 shops are full, he said, and the family is considering building more.

“There is a future for malls in Marib,” he said.

This article was originally published on The New York Times