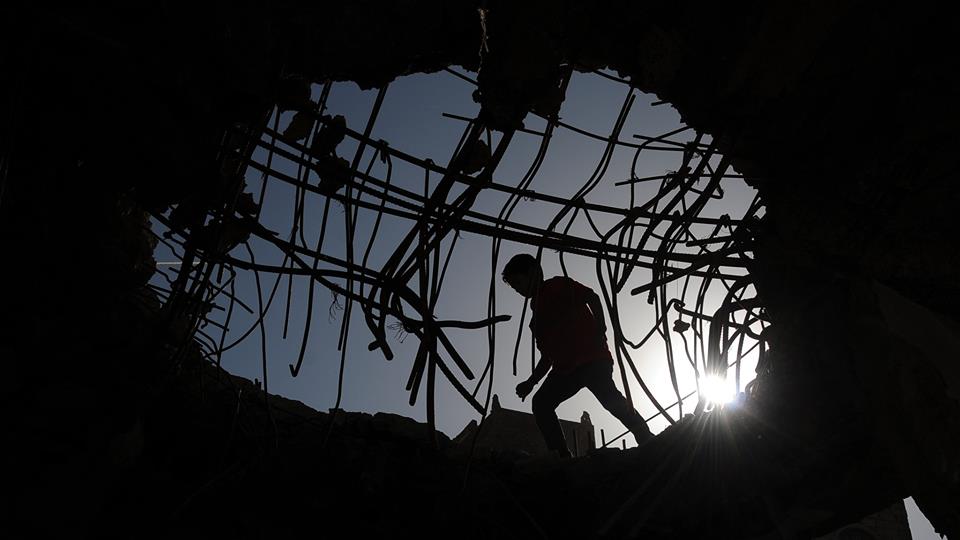 For more than a decade, Mohammed Hassan felt secure in his job inspecting and offloading goods as food, oil and medicine were shipped into the Red Sea port of Hodeida. Yemen’s largest cargo port has long been the main artery for the country and Mr Hassan always believed ships would dock there, even as conflict tore his nation apart. Then in November, the Saudi led-coalition, which supports Yemen’s exiled government in a civil war with Iranian-aligned Houthi rebels tightened its sea blockade of the country. The impact was immediate. Mr Hassan and other port workers lost their jobs. Food prices soared by more than 30 per cent and the cost of fuel doubled. The father of four, a wiry man who looks older than his 35 years, pulled three of his children, the oldest aged nine, out of school to work on the streets of Hodeida. “I didn’t want my children to stop their studies, but food prices increased so much and I can’t feed my family,” he says. “I had to make a difficult choice, either ask my children to sell sweets with me or starve, so I chose the first.” The family now earns about 1,000 rials ($4) a day, half of what Mr Hassan earned at the port. He is, however, still better off than many: more than 8m Yemenis — almost 30 per cent of the population — are on the brink of starvation, according to the UN. All are victims of a man-made catastrophe that started as a Yemeni power struggle three years ago before morphing into a proxy war between Saudi Arabia and Iran that has left thousands dead and many more injured. Share this graphic As the two regional powers ramp up their battle for influence — with the US under President Donald Trump throwing its weight behind Riyadh to counter the Islamic republic — Yemen’s war has become the principal theatre where their allies are in direct conflict. It has already created a humanitarian crisis and risks escalating beyond Yemen’s borders. Gaining control of rebel-held ports, particularly Hodeida, is crucial to the Saudi-led campaign to squeeze the Houthi-controlled north and stem what the coalition claims is the flow of arms to the rebels from Iran and Hizbollah, the Lebanese militant movement, backed by Tehran. In the face of international pressure, the Saudi-led coalition eased the blockade on Hodeida last month, saying it would allow aid and commercial goods to enter the port for 30 days. But it has done little to end the suffering in a city where children beg on most street corners and hospitals bereft of resources struggle to treat emaciated infants. Residents fear that Hodeida is set to become the next big battleground in the conflict as pro-government forces, backed by Saudi air strikes, advance from their southern bases in an offensive to seize the port and encircle Sana’a, the Houthi-held capital. “If the war arrives in Hodeida, we will all die inside our houses,” says Islam Montaser, a repair man whose children are among those begging around the port.

The offensive was launched after the Houthis killed Ali Abdullah Saleh, their erstwhile ally and the former president who ruled Yemen after uniting the north and south in 1990. The death of such a key figure has shaken up the dynamics of the war and triggered a new wave of bloodshed. The coalition had sought to lure Saleh to its side and exploit his political clout and cunning to shatter the rebel forces. Scenting betrayal, the Houthis killed Saleh after days of clashes in Sana’a. They have since tightened their grip on the capital, reportedly arresting and killing the former president’s allies. But they have lost the political cover their four-year-old alliance with Saleh and his General People’s Congress provided them. Riyadh reacted by intensifying its bombardment of Houthi areas. “Saleh’s death is [both] the closure of a bloody phase and the opening of a bloody phase,” says Farea al-Muslimi, co-founder of the Sana’a Centre for Strategic Studies. “Anyone trying to push for a military solution has the upper hand. But there is no military solution, it means politics is on hold . . . [expect] further escalation and worse regionalisation of the conflict.”

Both Riyadh and Abu Dhabi consider the Houthis, members of the Zaydi sect of Shia Islam, to be Iranian puppets. The Gulf powers frame the war as an example of Tehran stoking conflict in their backyard — the port’s blockade was imposed after the Houthis fired a missile at Riyadh that the Saudi government claimed was supplied by Iran. Tehran denies arming the Houthis, a group analysts describe more as an Iranian ally than a surrogate. Still, it serves Iran’s interests to see its regional rivals bogged down in an expensive and damaging conflict at limited cost to Tehran, they add. “Houthi propaganda plays to the line that Yemen is under attack by a Saudi-American-Israeli conspiracy,” Bruce Riedel, a former CIA analyst and director of the Brookings Intelligence project, recently wrote. “A major consequence of the war is to push the Houthis and Iran and Hizbollah closer together.” Abdulmalik al-Mekhlafi, Yemen’s foreign minister, says that seizing Hodeida and surrounding Sana’a are essential to forcing the Houthis to the negotiating table. “We have to control Hodeida, it was and it still is being used to smuggle Iranian weapons,” he says. “It’s one of the main sources of income [through customs duties] to the Houthis and we want to deprive them of that.” He insists that aid could come through government-controlled ports in the south — the Saudi-backed administration is based in Aden. But close to 80 per cent of imports depend on access through Hodeida and neighbouring Saleef port, according to the UN. It said in a report in November that despite the damage inflicted on Hodeida during the conflict, “there is no viable substitute for the port both in terms of infrastructure and proximity to Yemen’s largest population centres”.

Mr Mekhlafi says criticism of the embargo on Hodeida has become “politicised”. He asks: “Can the international community . . . guarantee that weapons will not enter through it again? That the Houthis will not benefit and make money from it?” The narrative fits with that of his exiled government’s Saudi backers. Crown Prince Mohammed bin Salman, who, as defence minister, orchestrated the kingdom’s military intervention in March 2015, described the missile attack on Riyadh as an “act of war”. The shock “resignation” of Lebanese prime minister Saad Hariri while he was apparently detained in Saudi Arabia in November was viewed as part of the crown prince’s efforts to indirectly exert pressure on Hizbollah, a key player in Lebanon’s government and alleged backer of the Houthis. Three weeks later — after Mr Hariri had returned to Beirut and reversed his resignation — the Houthis launched another missile at Riyadh. Saudi Arabia’s defence systems intercepted the rockets, but the attacks signalled a dangerous escalation. Days before the second attack the US presented what it claimed was conclusive evidence that Tehran was supplying arms to the Houthis. It included remnants of what the Pentagon said was an Iranian-made ballistic missile fired at Riyadh in November.

“You will see us build a coalition to really push back against Iran and what they are doing,” said Nikki Haley, US ambassador to the UN. Iranian foreign minister Mohammad Javad Zarif responded by tweeting: “While Iran has been calling for ceasefire, aid and dialogue in Yemen from day one, the US has sold weapons enabling its allies to kill civilians and impose famine. No amount of alternative facts or alternative evidence covers up US complicity in war crimes.” He was referring to the criticism that both the US and the UK have received for supplying Saudi Arabia with arms to bombard Yemen, destroying markets, hospitals and homes. More than 3,200 civilians were reportedly killed by Saudi-led coalition forces between March 2015 and August 2017, according to a UN human rights report. After 68 people were killed by air strikes on December 26, including 14 members of the same family in Hodeida province, Jamie McGoldrick, the UN humanitarian co-ordinator for Yemen, said the bombings “prove the complete disregard for human life that all parties, including the Saudi-led coalition, continue to show in this absurd war”.

In cities and towns where there is no fighting on the ground, like Sana’a, life appears, on the surface, to be normal. But residents live in fear of the buzz of warplanes overhead. In areas that have become the frontline, such as Taiz, which has been bombed by coalition planes and shelled by Houthi artillery, residents live in misery, wondering where their next meal will come from and fearing diseases such as cholera. In Taiz, once a relatively prosperous city, thousands of people have been forced to flee their homes and move to safer neighbourhoods. Those who leave the city are forced to take circuitous routes over mountain roads to avoid the fighting and navigate checkpoints manned by myriad armed groups that dot the countryside. Al-Qaeda in the Arabian Peninsula, considered one of the most dangerous affiliates of the global terror network, has taken advantage of the chaos to deepen its hold on remote areas of the desert plains in the south and west. Yet while the death toll mounts, the Saudi-led forces have struggled to make headway against the Houthis, a battle-hardened group from Yemen’s northern mountains that fought six campaigns against Saleh’s regime in the 2000s. “The way it [the campaign] was executed by the coalition was so bad,” says Rafat al-Akhali, a Yemeni analyst and former government minister. “The so-called internationally recognised government, which is very weak, has lots of corruption and is divided into many fronts. [And] all these air strikes on civilian areas only make things worse in terms of not making people want [Saudi] help.” Mr Akhali returned to his country during the 2011 Arab uprisings armed with an MBA from Canada and brimming with hope. The revolution ended Saleh’s 33-year hold on power when he was forced to step down in 2012 to be replaced by his deputy, Abd-Rabbu Mansour Hadi. As an economic crisis deepened in the Middle East’s poorest state, the Houthis moved into Sana’a in late 2014 with promises of rooting out graft — a message that resonated among long-suffering Yemenis, Mr Akhali says. The war erupted soon after, forcing Mr Hadi to flee to Riyadh. To many Yemenis he is merely an exiled figurehead presiding over a government dependent on Saudi air power, Emirati special forces and a loose alliance of ultra-conservative Salafists, southern secessionists and tribal fighters. Saleh’s GPC is weak and divided, the party’s forces and members scattered between the government and rebels. “There is a complete fragmentation of everything; of society, of state. You have different groups vying for power and each group further fragmenting into smaller groups,” Mr Akhali says. “That’s the biggest challenge even when the war stops.” He clings to the hope that a political solution can be reached if there is a serious international effort to end the conflict. “A lot of people feel that it’s solvable. What you often hear is ‘that it’s not Syria and it’s not Libya’,” Mr Akhali says. “The players are still known, but with time it becomes more and more complicated.”

This article was originally published by the Financial Times