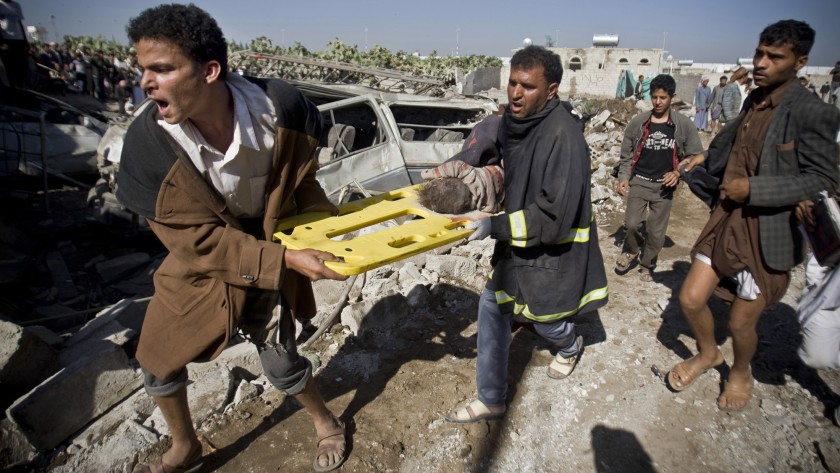 As top allies scale back in Yemen, Saudi Arabia faces prospect of an unwinnable war

More than four years after the Saudis and other nations sought to help restore government control by defeating the Houthi rebels, the war in Yemen has left almost 100,000 people dead, brought near-famine to millions and made the country’s name synonymous with misery. Aid workers use words such as “biblical” and “epidemic” to describe conditions.

The country seems so hopeless to many nations that even the United Arab Emirates, Saudi Arabia’s closest partner in the coalition it leads in Yemen, recently announced it was withdrawing most of its troops in hopes of strengthening a peace initiative.

Instead, one of the coalition’s Yemeni factions on Saturday snatched the port of the southern city of Aden, the temporary seat of power of the U.N.-recognized Yemeni government and a bastion of UAE influence. It was part of a days-long offensive that had already overrun the government’s bases and the presidential palace, forcing Riyadh to respond with what it called “military action” on one of its putative allies to stop the advance.

With the coalition splintered, Saudi Arabia remains largely alone, calling for ever greater U.S. arms support to pursue an increasingly unpopular war where victory seems remote, if not impossible.

“The war was never winnable in the first place,” said Farea Muslimi, head of the Sanaa Center for Strategic Studies, a think tank based in Yemen’s capital, in a phone interview. “With the second-most-important partner gone, even this illusion is no longer there.”

There’s little sign, nevertheless, that the Saudis or the Houthis, a politico-religious group, are ready to quit the fight.

“It’s high time that the Houthis . . . put an end to their illegitimate occupation of the centers of powers in Yemen,” said Saudi Ambassador to the United Nations Abdallah Mouallimi in a July news conference in New York.

Peter Salisbury, a Yemen expert at the International Crisis Group, a think tank, says Saudi Arabia is unlikely to agree to any change in status unless it can point to a victory.

“The problem right now from the perspective of ending the war is that Saudi Arabia and to an extent the Trump administration are unwilling to do so without a tangible ‘win’ for Riyadh,” Salisbury said in a phone interview.

The uprising tied to the Arab Spring of 2011 that opposed Yemen’s authoritarian government was aimed at ushering in a more inclusive state and disposing of problems such as corruption and food shortages. In 2014, the Houthis, who have received backing from Iran, were fed up with the slow path to change and blitzed into the Yemeni capital, Sana.

Saudi Arabia launched its intervention in March 2015. It was meant to signal a new era of muscular foreign policy, especially in Saudi Arabia’s longtime clash with Iran.

Under the stewardship of Prince Mohammed bin Salman, then the new defense minister (he was appointed crown prince in 2017), Saudi Arabia assembled a coalition of nine countries in the region and Africa to oust the Houthis and reinstate the government of former Yemeni President Abdu Rabu Mansour Hadi.

It unleashed an intense air campaign, along with a crippling sea blockade that left perennially impoverished Yemen on the brink of famine. The UAE led the ground offensive with a force cobbled together from mercenaries, Sudanese janjaweed fighters and Yemeni militias who hated each other a bit less than they hated the Houthis. The U.S., meanwhile, provided intelligence and logistics support, including in-flight refueling; it also fast-tracked weapons deliveries to both Saudi Arabia and the UAE.

The intervention was meant to be over in a few months, but many analysts say the conflict has become a quagmire reminiscent of Vietnam. The Houthis still hold much of the country’s western provinces, including Sana, and the highlands near the Saudi border as well as a portion of Yemen’s Red Sea coast.

The human cost of the war has been devastating, with millions of people displaced and in need of assistance.Aid agencies and others say 24.1 million people out of a population of 28 million require some form of help, with about 10 million suffering from extreme hunger.Nearly 18 million people lack adequate access to water, and more than 19 million people lack proper access to healthcare, aid workers say.

The United Nations concluded in a Februaryreport that millions more Yemenis are “sicker, hungrier, and more vulnerable than a year ago.”Yemen suffered the world’s largest cholera outbreak in 2017; more than a million cases were reported, said the World Health Organization.

Mounting casualties in the country became a cudgel for human rights campaigners. Even U.S. lawmakers, usually obsequious with their Saudi and Emirati allies, joined in the outcry, especially after the killing last year of journalist Jamal Khashoggi, which is widely viewed by international officials to have been commanded by Bin Salman.

“I think that all of my colleagues can agree that the United States and Saudi Arabia need a course correction,” said Sen. Robert Menendez (D-N.J.), the top Democrat on the Senate Foreign Relations Committee. “The brutal murder of Jamal Khashoggi, an American resident and journalist in a Saudi consulate may have been the final, violent straw that broke the camel’s back, but we must reexamine this relationship.”

The UAE’s so-called strategic redeployment last month seemed an acknowledgment of the stalemate between the two sides.

More than half of the roughly 5,000 Emirati soldiers who had been estimated to be in the country and nearby bases — there are no public figures; some estimates put the number at 10,000 — have already left with their heavy weapons, according to military officials, analysts and activists. That’s been especially true near Hudaydah, the Red Sea port and vital aid supply line for much of the country.

The Saudi coalition had long accused the Houthis of using Hudaydah to control aid flows and smuggle weapons, and had clamored to take it. But widespread international pressure proved strong; an offensive set for last year was canceled, and a cease-fire in Hudaydah became the centerpiece of U.N.-brokered peace talks held in December in Stockholm.

Emirati officials insisted in interviews that their drawdown was an extension of the Stockholm plan, despite its tortuous implementation. Houthi forces began withdrawing from Hudaydah in May.

“We’re very frustrated by Stockholm, but it’s the only game in town. We want to empower it,” said one Emirati official, who spoke on condition of anonymity in order to speak freely.

Saudi Arabia’s air campaign has also been reduced in intensity from an average of 19 daily strikes in 2015 to nine in 2018, according to the Yemen Data Project, which compiles strike data on the war.

Joint U.S.-UAE counter-terrorism operations will be unaffected, officials said. Both countries have deployed special forces teams in Yemen against Al Qaeda in the Arabian Peninsula, which the U.S. considers the terror group’s most effective branch.

The UAE has trained tens of thousands of local fighters to take over its duties in Yemen, said Abdulkhaleq Abdulla, a UAE-based political analyst.

“I don’t think we’re going to see major fighting that you need heavy Saudi or Emirati forces,” he said.

The UAE plans to continue its support for large-scale humanitarian assistance programs, funding for the U.N. and other international organizations, as well as salaries for a number of its allied factions. Abu Dhabi has given $5.5 billion in aid to Yemen since 2015, Emirati officials say; the U.N.’s office for coordination of humanitarian activities reported the country needed $3.1 billion in 2018 alone.

But the UAE’s absence will inevitably be felt in places where it had engineered an arrangement among the coalition’s local forces, said Michael Knights, a researcher with the Washington Institute for Near East Policy, in a phone interview.

The weekend brought proof of those words when a militia backed by the UAE, the Southern Transitional Council, seized Aden using the 400 armored vehicles it had received from the UAE, the Yemeni government’s interior minister, Ahmad Maysari, wrote in a tweet.

He accused Saudi Arabia of having done nothing for days while “our partner was slaughtering us.”

Meanwhile, Prince Khaled Bin Salman, the Saudi vice defense minister, urged calm, saying in a statement that what happened in Aden gave an opportunity to those wishing ill for Yemen, including the Houthis and Al Qaeda.

The extent of domestic support for the war in Saudi Arabia is unclear. About 3,000 Saudi Arabian soldiers have been killed and 20,000 wounded during the fighting in Yemen, according to estimates by analysts and others. The government, however, seems determined to continue fighting, especially after an uptick in Houthi missile and drone attacks on southern parts of the country, which shares a border with Yemen’s Houthi-controlled northern provinces.

The U.S. expects the Saudis to press President Trump for added military assistance to make up for the UAE’s withdrawal, said a senior U.S. official, who was not named because the official was not authorized to discuss internal assessments publicly.

Given the dim prospects for a Saudi-led victory and the strong opposition in Congress to continuing U.S. involvement, the official said, additional U.S. help is unlikely.

“We’re not ramping back up,” the official said. “The Saudis have to recognize that.”

This article was published on The Los Angeles Times