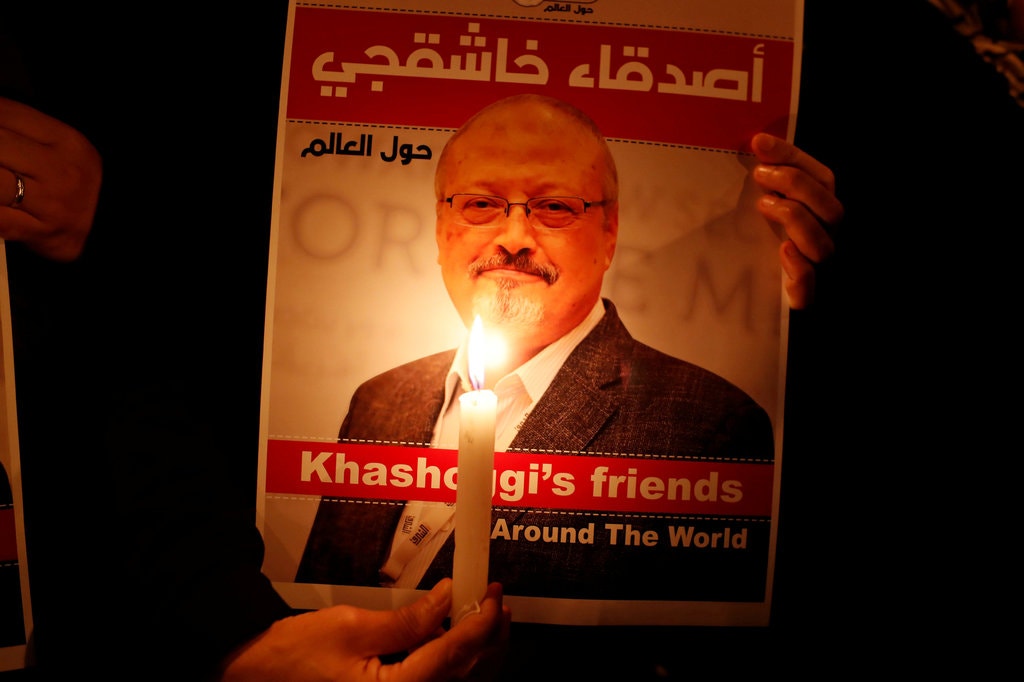 The last time I saw my friend Jamal Khashoggi was in September 2017, when he was settling into his self-imposed exile in the United States. We argued about politics over dinner at a steak house in Washington. We cracked jokes about my struggle with a small piece of steak and his ease at devouring a much larger choice cut.

Being a writer and daring to voice an opinion has rarely been an easy path in the Middle East. After Jamal was tortured and murdered on Oct. 2, 2018, inside the Saudi consulate in Istanbul, his body dismembered and never produced for burial, many Arab writers, intellectuals and activists came to fear a new normal. Even audacious, critical voices now self-censor, hold back.

After the news of his murder was confirmed, shock, disbelief, powerlessness and a terrible feeling of loneliness overcame me. One morning, I woke up with a broken tooth in my mouth, having ground it in sleep. “This could happen to me,” I thought.

In 2011, after the uprising against President Ali Abdullah Saleh erupted in Yemen, it seemed as if my entire generation was in the streets demanding change and freedom. I came together with a small group of young, politically aware men and women who were fluent in English and Arabic.

We spoke on television, wrote articles, acted as fixers for foreign journalists, helped humanitarian organizations document massacres and critiqued shoddy international news coverage of Yemen on social media. Daring to stand up in Yemen in 2011 meant we lived under the threat of arrest and torture, and the possibility of being killed.

In 2014, I helped co-found an independent research organization in Sana that works across the country. My colleagues have been arrested, bullied, detained and threatened by all sides in the continuing conflict. Every time the phone rings from a colleague in Yemen, I anticipate bad news.

Elsewhere in the region it’s not much safer. In 2016, I was deported from Bahrain. Last year, I got permission to visit Sana, which is controlled by the armed Houthi movement. Despite assurances of my safety, I handed my assistant a 120-word statement regarding my possible death or arrest, which she was to release if she had not heard from me for more than 24 hours.

I first met Jamal in 2009 in Beirut at a conference of the Arab Thought Foundation, which was established by Prince Khaled bin Faisal al-Saud of Saudi Arabia. I began following Jamal’s writing and analysis closely, mostly to understand what his government wanted people to think. For years, he was the editor of one of Saudi Arabia’s top government newspapers and a media adviser to the former head of Saudi intelligence.

In March 2015, Jamal’s Saudi Arabia started bombing my Yemen. I was in Sana and watched Jamal using his Twitter account to cheer the bombs falling on my city. On the ground in Sana, I saw men, women and children fearful and bloodied. Sometimes we would both be quoted — disagreeing — in articles or interviews about the war. He was a believer, a campaigner for the Saudi-led military campaign in Yemen.

That is why his murder caused such fear and horror. Jamal was not a dissident. He believed in Saudi Arabia and Prince Mohammed bin Salman.

At the end of the summer of 2017, Jamal and I were at a conference in Washington, where he spoke passionately about the Arab Spring, the rise of Prince Mohammed and his Vision 2030 plan for economic diversification of the kingdom.

Jamal was excited about Prince Mohammed’s vision, especially the plan to nationalize jobs. He had written a book titled “The Occupation of the Saudi Market,” calling, more or less, for the expulsion of foreign laborers from Saudi Arabia. We sharply disagreed about it — millions of Yemenis depend on remittances sent home from relatives working in Saudi Arabia — but we listened to each other with respect and open hearts.

Two days after the conference, we met for dinner in Washington. At a certain point, Essam al-Zamil, a Saudi economist, joined us. Jamal was happy because he had found a house and was furnishing it. I asked him whether I should take that as a sign that he planned to settle there. “Yes,” he replied. I understood that Jamal no longer felt safe in Saudi Arabia.

I did not see either of my dinner companions again. Saudi intelligence officers were waiting for Mr. al-Zamil when he arrived the next day at the airport in Riyadh. They took him to a prison and he has not been seen since. Like Jamal, Mr. al-Zamil supported the Saudi government; when we met he was in Washington promoting Vision 2030. His apparent mistake was publicly questioning the wisdom of Prince Mohammed’s plan to float shares in Saudi Aramco, the state-owned oil company.

Prince Mohammed was known for his unpredictability, but Jamal’s murder placed him squarely in the league of global rogues. Across the Arab world, intellectuals, writers, activists and ordinary citizens are censoring themselves because when they don’t, governments do.

In my homeland, Yemen, the situation is little different. Before the Houthis took control of Sana, the city had more than 20 independent daily and weekly newspapers. Now we have no independent press, only sectarian Houthi publications.

Since 2015, the Houthis have imprisoned more than a dozen journalists. In December 2016, my friend and colleague Mohammed al-Absi, who was Yemen’s most renowned investigative journalist, was assassinated in Sana. He was poisoned while working on a story investigating the war economy. Two years later, the United Nations Panel of Experts, citing and building on Mohammed’s work, concluded that Houthi warlords are some of the largest players involved in the illicit fuel trade in Yemen. Mohammed’s killers were never found or persecuted.

Manal al-Sharif, a Saudi women’s rights activist who dared to drive before Prince Mohammed allowed women to do so, recently shut down her Twitter account for the first time since 2008. Even Lebanon, where I have lived for many years and which I treasure as a rare oasis to think, speak and sing without worry, is losing its freedom of expression.

After Mr. al-Zamil, the Saudi economist Jamal and I met for dinner in 2017, was disappeared, I messaged Jamal pleading him not to return to Saudi Arabia. “I won’t be surprised if you are next,” I wrote.

“They all fall down the same way,” he replied, referring to authoritarian regimes.

A year later, Jamal’s remains are yet to be found, but the Saudi message, spoken on behalf of autocrats across the region, has been heard clearly: If you do not say what we would have you say, your death will be brutal, your body will vanish and you will never even be buried.

The murder of Jamal Khashoggi warned us all. Perhaps the greatest danger the Arab world faces today is that there will be no one left to shout, write or sing that the king is naked in a region plagued by too many kings.

This article was published on The New York Times.